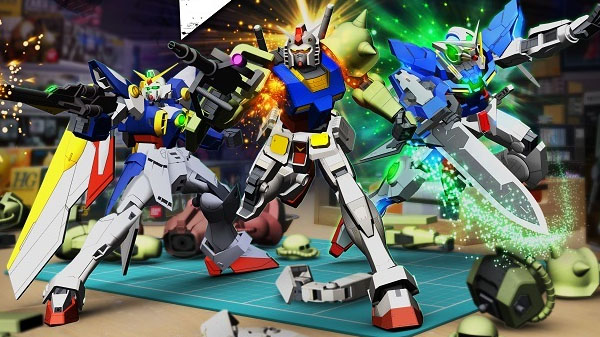 Bandai Namco has announced the release date for New Gundam Breaker, and it’s a lot sooner than expected, with the game coming to PC via Steam and PS4 on June 22. This marks the Gundam series’ first appearance on Steam, and the first time the Gundam Breaker series has appeared in the West in years.

New Gundam Breaker isn’t your typical Gundam game, as it actually focuses on building Gunpla models and using them in battle. You’ll be able to swap out a variety of different parts on your Gunpla, mixing and matching your model as you see fit. The game features an original story, and surprisingly even has a dating mechanic. There’s a number of different heroines in the game that will play into the story, although Bandai Namco hasn’t said exactly how the dating mechanic will work.

A multitude of Gundam series will be represented in New Gundam Breaker, all the way from the original Gundam to the newest series Gundam: Iron-Blooded Orphans. Here’s a quick overview of the game from Bandai Namco.

“Fight against over 100 of your favorite mobile suits in team battles, collect their parts and use them to complement your fighting style or to reproduce the look of your choice Gundam. You can even switch out parts during combat to give you the upper-hand against your enemy. The combinations and possibilities for different builds are endless, so let your imagination run on overdrive and build the Gundam of your dreams.”

New Gundam Breaker will release on June 22 for PS4 and PC via Steam. Take a look at the new trailer down below, featuring the game’s theme song “Snatchaway,” by Japanese solo artist Sky-Hi.

Are you excited to see Gundam Breaker come west again? What do you think about the game including a dating mechanic? Leave a comment down below and let us know.