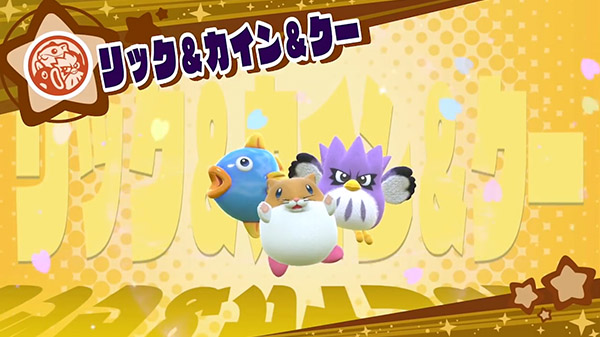 Kirby Star Allies is a game all about the power of friendship, and the newly-released Switch game is about to get even more powerful with even more friends. The game is getting a series of free updates, with the first representing a handful of friends from the Game Boy title Kirby’s Dream Land 2.

The characters Rick, Kine, and Coo are the trio shown in the trailer below, and they’re also on the Kirby’s Dream Land 2 cover from the Game Boy release. In addition to the Gooey and Marx characters, they’ll be new Dream Friends you can recruit to kick enemy butt as you make your way through the game with Kirby and a host of powerful characters.

Kirby Star Allies gives you marching orders as the pink puffball to journey across a colorful world with a cavalcade of fun Kirby friends. As you make your way through, you’ll collect several acquaintances to help fight the evil that’s corrupted the land. That’s where your new DLC friends come in. You can recruit characters like King Dedede and Meta Knight as you continue your journey, so you’ll never have to face the bad guys alone. If you haven’t been hanging out with Kirby and all his friends just yet in this new Switch game, you’re really missing out.