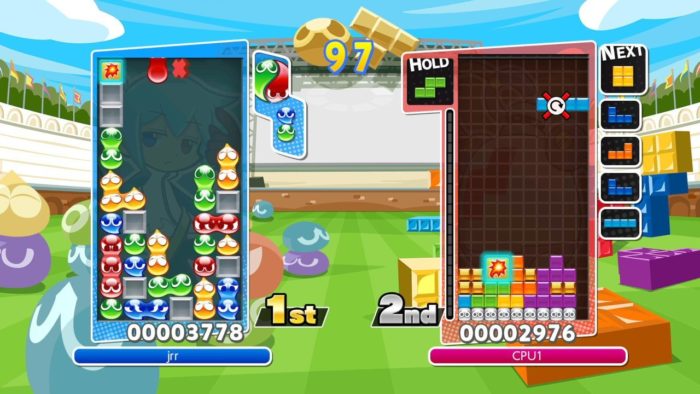 What’s going on with Puyo Puyo Tetris and Sega? It looks like Sega is working on sending a port of Puyo Puyo Tetris to PC, if a series of updates on Sega listings on Steam can be believe. Today, updates for games like Binary Domain, Bayonetta, and Vanquish started appearing with aCII art of Puyos and a Z-tetromino. These are obviously being taken as teases for an upcoming port of Puyo Puyo Tetris, or maybe even something new for the series. Whatever it is, it’s a very cool surprise if that’s the case.

It would make sense that a PC port of the game could be coming, especially since it’s on Switch, Wii U, PlayStation 3 and Vita in Japan, and PlayStation 4 and Switch everywhere else. It deserves a PC port, and it would likely attract several other players if it had a widespread PC release, especially with online multiplayer options. If you don’t want to wait around for some sort of PC announcement, you can go ahead and grab the game right now on Nintendo Switch or PlayStation 4, especially if you like Tetris or puzzle games. It’s a great mashup of both titles.

If we continue seeing additional ASCII-related teases on Steam or elsewhere, we’ll make sure you’re kept in the loop. It could be nothing, too, but this is way too specific to not be anything Puyo-related.