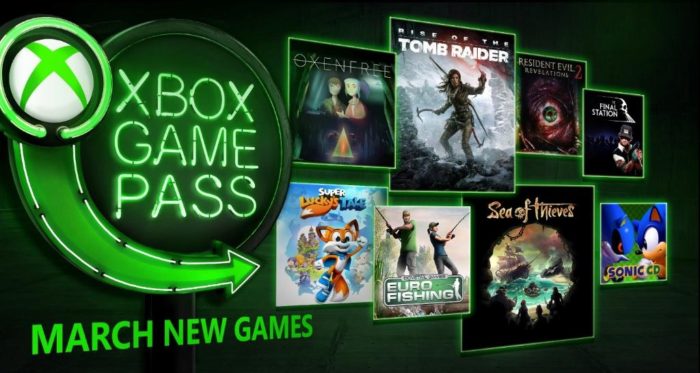 Looking to try out Sea of Thieves when it launches March 20? If you’re an Xbox Game Pass subscriber, you’ll be able to play it for no additional charge the same day it makes its debut on the console. You can also play over 100 other titles, including a bundle of games the Microsoft’s Larry Hyrb (Major Nelson) just announced as confirmed for the service.

A total of eight new titles are being added to the Xbox Game Pass collection, including Sea of Thieves, Super Lucky’s Tale, Rise of the Tomb Raider, Resident Evil Revelations 2, Euro Fishing, Oxenfree, and Sonic CD. These are all coming in March to be added to the already-long list of over 100 games the service includes.

Eight new titles coming to Xbox Game Pass in March including Rise of the Tomb Raider, Super Lucky’s Tale and Sea of Thieves (on March 20th when it releases). See the full list here: https://t.co/48fWqw1fmf pic.twitter.com/BmpefJCdCg

Xbox Game Pass is $9.99 per month if you want to subscribe to the service, but you get to play through a regularly rotated list of different games to test out, plus all future Xbox One exclusives will hit the Game Pass selection on launch days. This way you don’t have to pay extra for the game and you still get a chance to play the newer game releases as soon as they make it out. If you haven’t tried it, there’s currently a 14-day free trial you can test out before committing.