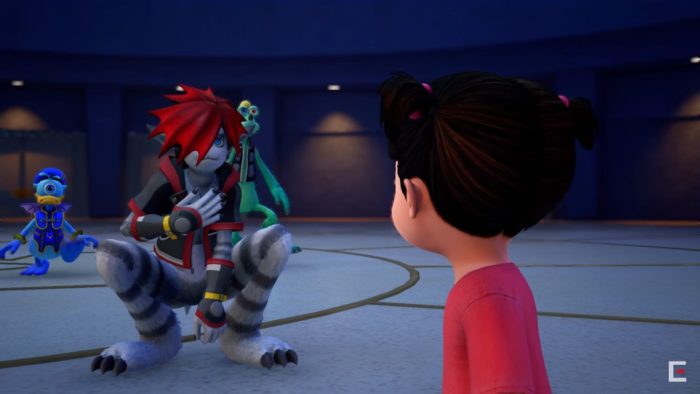 Kingdom Hearts III fans have been anxiously awaiting any word of a new world for weeks now, ever since a rumor slipped that the game might be featuring Monster Inc. Well the good news is Disney and Square Enix have finally confirmed those hopes at D23 Japan, announcing that Kingdom Hearts III will in fact feature Monsters Inc. As you might expect Sora, Donald, and Goofy are all sporting adorable monster outfits.

A new trailer was shown off during the show, which you can view right down below. In addition to showing off the new world, the trailer also reveals that both Marluxia and Vanitas will play a role in some way.

Also at D23, Square Enix confirmed that Kingdom Hearts III is still slated for release in 2018. The company is expecting to reveal the official release date at this year’s E3 in June. A second trailer was released during the show, that gave us a brief taste of Utada Hikaru’s new theme song for Kingdom Hearts III, titled “Don’t Think Twice.”

Kingdom Hearts III will release sometime in 2018 for PlayStation 4 and Xbox One. What do you think of the new trailer for Kingdom Hearts III, and the Monsters Inc. world? Let us know down in the comments below.