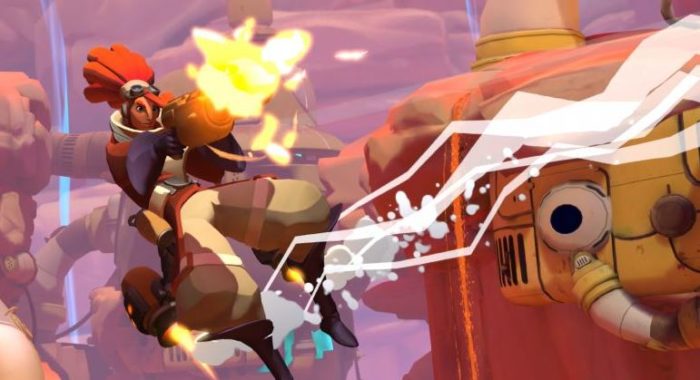 Motiga and Perfect World Entertainment have announced that Gigantic’s online serves are to be shut down. Announced this morning in a blog post on the Gigantic site, the servers will reportedly shut down on July 31, with today’s new character “T-Mat” and balance changes being the final update the game will receive.

This news comes almost three months after publisher Perfect World shut down Motiga, leaving development on the game to “a core team of developers,” according to a statement to Kotaku. This came at the same time Perfect World shut down Runic Games, developers of the Torchlight series. Gigantic’s shutdown comes following months of stagnating player count, with the game struggling to peak past a thousand players for months, with the game’s player count halving every month since its release in July 2017.

In the January update, a new hero character was added to the game, with tons of new skins, and the change that all heroes are now free. Additionally, microtransactions have been disabled and in-game items prices have been reduced significantly.

In the announcement of the shutdown, Gigantic developers tried to explain what went wrong, saying Gigantic “did not resonate with as many players as we’d hoped. Over the last several months, the teams at Motiga and Perfect World looked into viable options to sustain Gigantic. However, the current state of the game has restricted options for further progress and relevant content updates, and delivering basic features while also fixing long-standing issues was more complicated than expected.”

Motiga did not clarify whether the issues involved in development were a result of the mass layoffs the company experienced. Just two hours before the announcement, Gigantic players on Reddit were taking issue with lack of communication on the update. Now, those same players are speculating how they can keep the game alive, claiming that due to an exemption in the Digital Millennium Copyright Act, players could host community-run servers without issue. For the sake of the game’s fans, hopefully this turns out to be a possibility.

Gigantic will continue to be available on Steam and Xbox One until its shutdown.