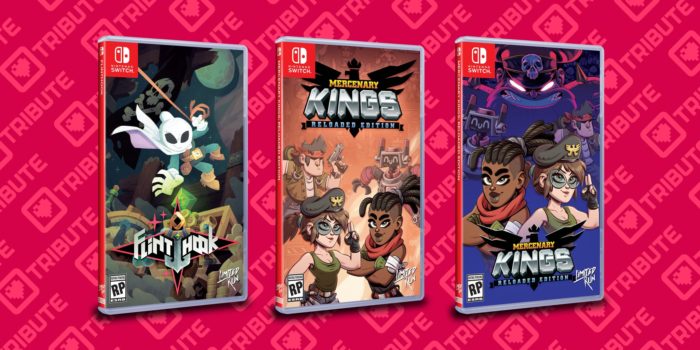 Indie developer Tribute Games have announced that they are brining two of their previous games to Nintendo Switch: Mercenary Kings and Flinthook. Not only this, but they are both going to be receiving limited physical runs courtesy of Limited Run Games. These games join the previously announced Saturday Morning RPG as some of the first games that Limited Run Games are publishing for the Switch.

Mercenary Kings is a Kickstarter funded side-scrolling run ‘n’ gun game, not dissimilar to SNK’s Metal Slug series. It was released in 2014 for the PC and PS4, but is finally making its way to Switch, PS Vita and Xbox One with the new ‘Reloaded Edition’ subtitle. This new version will include a bunch of extras, including two new characters, some new weapons, a new mission, as well as a bunch of technical tweaks to make it the definitive edition. PC and PS4 owners of the vanilla Mercenary Kings will receive the Reloaded Edition for free. This will be arriving on all platforms on Feb. 6. Limited Run Games will be releasing a physical copy of the game for PS4, PS Vita and Switch, all of which will feature a reversible cover. However, the release date for this physical release is unknown as of yet.

Flinthook is Tribute Games’ latest release, and has been available on PS4, Xbox One and PC since April 2017; now the roguelike action game is coming to Switch. Inspired by the likes of Spelunky and Rogue Legacy, in Flinthook you play as a space pirate with a grappling chainhook who searches procedurally generated levels for treasure. Limited Run Games published a physical version of Flinthook on the PS4 alongside its digital release, and it looks as though the they are poised to do the same for the Switch version. The game is due out on Switch some time in 2018.