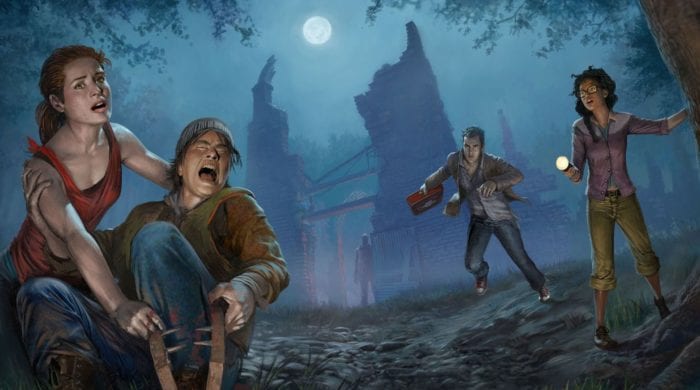 Fans of the Saw film franchise are going to be excited about the new Dead By Daylight update being teased that will reportedly include a new map and the films’ Pighead character. Since its release in June 2016, Dead By Daylight has been constantly receiving new DLC characters and maps, adding to the game’s lore and gameplay.

In a teaser for the update the Dead By Daylight official YouTube channel, a ticking clock is shown ringing, and a bear trap slams shut, followed by the words “Lets play a game” showing on screen. Fans of the Saw films will know this as the signature trap and quote of Saw antagonist Jigsaw, who often traps his victims then forces them to complete deadly puzzles, often involving bear traps.

This is, in fact, not the first horror film themed update to the game, as it has received DLC for characters like horror movie legends like Freddy Kreuger, Leatherface, and even Michael Myers (The horror movie character, not Austin Powers).

While it may be difficult to speculate that Jigsaw, a puppet riding a tricycle, could be a killer on par in physical strength with Freddy Kreuger, a leak on Reddit revealed that the new killer character is actually Pighead, Jigsaw’s deadly follower in the films. It is important to understand that this leak is not official and may be incorrect, so take this information with a grain of salt. Nevertheless, there aren’t any other believable antagonists in the Saw franchise so this while the details may be incorrect, Pighead is most likely the actual new character.

Pighead’s ability, according to the Reddit post, is called “Jigsaw’s Baptism,” and enables the player to crouch and dash towards enemies stealthily and perform an ambush attack. Additionally, when Pighead downs a player, they can place a “Reverse Bear Trap” on the player, which acts similarly to the ones in the films: being on a timer, which when expired, will release the bear trap and kill the player, unless they find a key in the map which removes the trap.

In addition to the teaser, developers showed off stills from the new map:

For those uninitiated with the game, Dead By Daylight is a horror co-op game in which one player, acting as the horror-movie themed killer, has to hunt down the four other players trying to escape the level alive. The game is the leader in a sub-genre of games with the same premise which began popping up in the past few years after the massive popularity of a mod for Half-Life 2 mod with the same premise called The Hidden. The game has maintained a massive player base since its release, with over 15 thousand players active in the game according to SteamCharts as of writing this story.

This story will be updated when further info on the DLC is released. Dead By Daylight is available on Steam for PC, Xbox One, and Playstation 4.