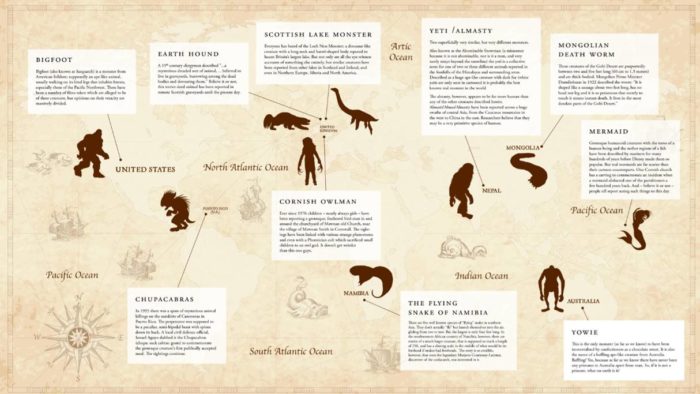 In one of the most bizarre PR stunts we’ve ever heard of, Capcom is offering UK residents £50,000 ($70,500 USD) to find hard evidence proving the existence of one of ten mythological creatures.

Last week, Capcom released its hotly anticipated title, Monster Hunter World. The game sees players gear up to venture on quests to battle fearsome creatures, progressively improving their hunting abilities as they play. Presumably figuring the experience would have its players in an adventurous mood, Capcom has decided there would be no better way to promote the game than sending them on a wild goose chase to find old wives tales and boogie monsters grounded in as about as much reality as its own fantastical game.

“When planning the upcoming launch of Monster Hunter: World we couldn’t help but keep coming back to the real-life monsters we’ve all heard stories about since we were kids. Speaking to the world’s leading real-life monster hunter, Jon Downes, we were inspired to re-open investigations into a select list of top 10 beasts, setting a huge bounty to really encourage people to get back out hunting for evidence. Much like in the new Monster Hunter: World game, we through it was only right that the scale of the reward fit the task at hand”.

Indeed, Capcom is taking this extremely seriously. The company has recruited Jon Downes, a real-life monster hunter and Cryptozoologist, to help select the monsters that still exist across the globe and assist with the skillful examination of evidence, once submissions have closed.

Downes explains that “there are stories of monsters from around the world, and while some may be flights of fancy, not every one of these monsters can be made up. It is one of life’s great mysteries and similar to Monster Hunter: World, I’ve spent the majority of my life traveling across the globe to hunt for evidence of these creatures.”

Before you get your hopes up, though, he also admits that while he’s “had some successes”, he’s “yet to find that elusive proof and it is time for me to offer my help as I throw down the gauntlet to the next generation.”

So if Downes, an expert that has dedicated his life to finding these monsters can’t do it, we’re not too hopeful for any big breakthroughs in the fives months between Jan. 30 and June. 30 that Capcom is giving punters to deliver. If you’re interested, though, here are the ten creatures it wants to be found:

Sadly for US gamers desperate to leave the comfort of their couch and travel the globe tracking down myths that have likely been disproven by thorough scientific investigation (you know, one of the those Discovery channel shows), this exciting opportunity is only available to UK residents. Boo! Applications are to be sent to [email protected]