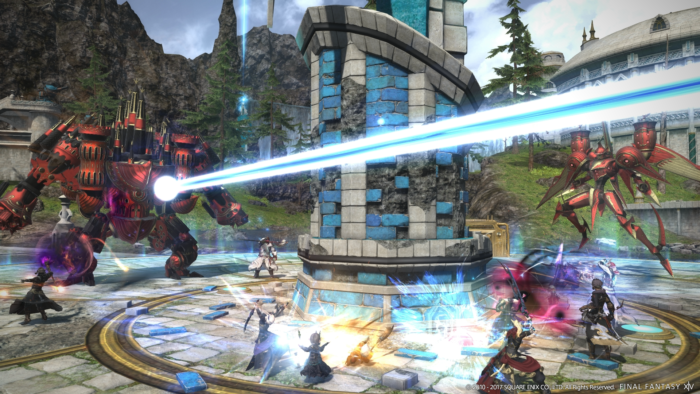 Square Enix has launched the latest patch for its successful MMORPG, Final Fantasy XIV Online, bringing a number of additions and refinements to the realm. It introduces a new PvP encounter called Rival Wing, as well adding Performance Actions which allow players to create their own music using the Bard job.

Rival Wings sees teams of up to 24 play against each other in a PVP arena assisted by AI goblin Automatons as they aim to destroy towers and a shield generator before destroying the opponent’s core. The game also allows players to power up and pilot a range of giant machina scattered around the arena. Square Enix describes the new mode:

To secure victory, the teams will begin by having to destroy their opponent’s towers, aided by waves of automatons periodically released by the goblins. After achieving this, the shield around the opposing core will drop, making it vulnerable to attack! Throughout the battle, there’ll also be opportunities to collect precious Ceruleum – gather enough, and players will be able to power up and pilot a range of mighty machina lying dormant on the battlefield …

Rival Wings will also be available to those using the free trial, which allows FFXIV players to level to 35 before paying for a subscription.

Other additions in patch 4.15 include a new Bard action, ‘Perform’. Square Enix describes the new melodic activity: “With harp in hand, Bards across Hydaelyn will be able to make the hills come alive with the sound of music.”

Finally, Season 5 of competitive PvP mode The Feast may have drawn to a close recently, but today’s launch of Patch 4.15 marks the start of Season 6, which will run until the release of Patch 4.2.

A full list of patch notes for 4.15 can be found here.