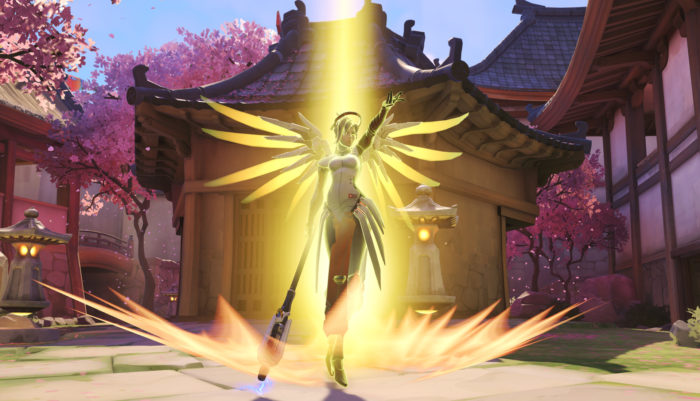 Blizzard is developing a new Overwatch patch that makes changes to the characters Ana and Mercy while also squashing a few bugs. PC players can test the changes in the game’s Public Test Realm (PTR) as of today.

In the current version of the patch, Ana receives a straightforward damage increase from 60 to 70 for her rifle. “Ana has been outshined by other support heroes lately,” Blizzard wrote of the change on the game’s official blog. “Boosting her damage will help her defend herself and make her more threatening to the enemy team.”

Mercy, meanwhile, has gotten a handful of tweaks. First up, there is now a 1.75-second delay from when she activates her resurrect ability to when it actually resurrects allies. In Overwatch’s production version, Mercy’s resurrect occurs instantaneously when players cast it. The patch also reduces the healer’s movement speed by 75 percent while she’s casting and allows enemies to interrupt her cast by knocking back, stunning, or hacking her.

When Mercy players activate the character’s Valkyrie ultimate ability, however, the cast time is nonexistent.

“We feel that Mercy’s recent rework has been successful, but her Resurrect ability still feels too strong and frustrating to play against,” reads Blizzard’s justification for the nerfs. “Now that it has a cast time, there is more room for enemies to counter the ability. However, casting Resurrect happens instantly when Valkyrie is active. This should make her feel powerful when she transforms on the battlefield.”

The rework Blizzard alluded to came in September in an attempt to address player concerns that Mercy’s abilities often made matches feel unfair. Her resurrect ability was previously her ultimate move and could revive an entire team at once if they had all recently died. In response to some players taking advantage of this in ways that many other players felt were unfair or boring, Blizzard changed resurrect to be a regular ability but one that could only revive a single ally at a time.

Feeling it had gone too far in weakening Mercy, Blizzard powered her back up a bit in October by making it easier to resurrect two characters at once while in Valkyrie mode. Apparently still unhappy with Mercy’s state, Blizzard has now decided to weaken her in yet another way.

In addition to buffing Ana and nerfing Mercy, today’s PTR patch also corrected a bug preventing announcer voice lines from playing correctly in some matches and another that caused the character Roadhog’s hook to stay attached to enemies for longer than it should.

As always, the patch’s changes could potentially be altered further before making it from the PTR into the production version of the game and again before making their way to console versions.