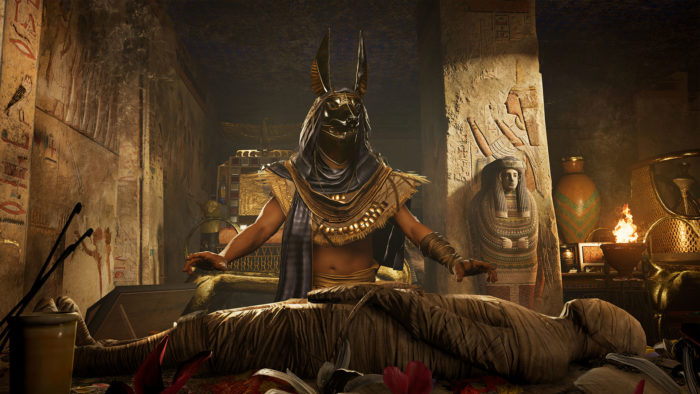 The release of Assassin’s Creed Origins is upon us, and Ubisoft has outlined their plans for what players can expect from both the season pass, and for free, some time after launch. Here’s what Ubisoft had to say about each via the UbiBlog, let’s start with the free stuff first:

“The Trial of the Gods – Face off against the Egyptian gods in boss battles during special timed events, and receive valuable rewards for victory. Kicks off 15 days after launch.

The Nomad’s Bazaar – Track down a wandering merchant who will give you daily quests to pursue and reward you with exotic mystery rewards. Available at launch.

Photo Mode – Capture the beauty of the Egyptian landscape, indulge your inner wildlife photographer, and discover interesting photos taken by other players. Available at launch.

Discovery Tour – This new game mode turns the world of Assassin’s Creed Origins into a combat-free living museum. Read more about this mode and the educational guided tours in our previous coverage. Available in early 2018.

Horde Mode – Hone your skills with blade and bow against endless waves of enemies in the Gladiator Arena, see how your scores stack up, and challenge your friends asynchronously. Available in early 2018.”

Obviously there’s a Horde Mode, because no game is complete without one in 2017.

“The Hidden Ones (DLC 1) – This expansion takes place years after the events of Assassin’s Creed Origins in a new region occupied by a Roman force. Bayek and the new Assassins will clash with the Romans as the Brotherhood continues to grow, and players will have a new level cap. Slated for release in January 2018.

The Curse of the Pharaohs (DLC 2) – The second expansion focuses on Egyptian mythology, pitting players against undead pharaohs and famed Egyptian monsters. Bayek will need to explore a mystical new realm and discover the root of the curse that has brought these creatures to life. This expansion will also raise the level cap again and introduce new skills for Bayek. Scheduled for a March 2018 launch.

The Roman Centurion and Horus packs – These exclusive item packs will grant Season Pass holders a new outfit, weapons, shield, and mount when they become available in November of this year.

500 Helix Credits and an exclusive rare weapon, the Calamity Blade – Both available at launch.”

Regardless of whether these additions get your juices flowing or not, a lot of it is free, so cool if you enjoy it, no harm if you don’t. Meanwhile season pass content will keep the game interesting with content going all the way to March.

It seems like Ubisoft is flirting with the idea of having a persistent rotating set of new things to do, and new content added in to keep people playing like what we’ve seen done in recent games like Destiny. While no one is going to call AC Origins a MMO, elements frequently seen in that genre is quickly becoming the standard in gaming it seems.

Assassin’s Creed Origins will be out on Oct. 27 for PlayStation 4, Xbox One, and Windows PCs.