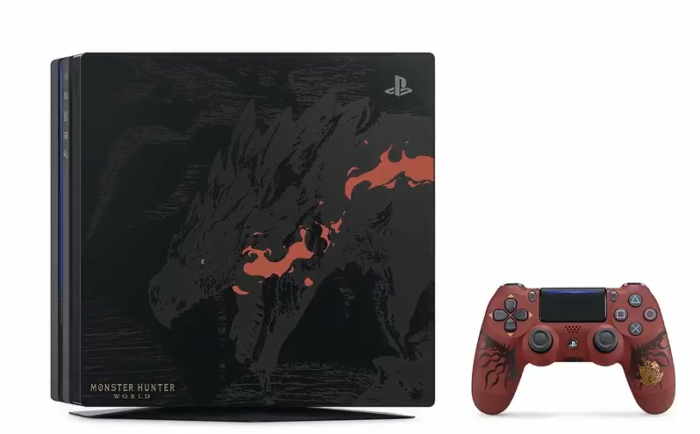 TGS is in full swing right now, and amidst a new trailer (which you can check out below) for Monster Hunter World, Capcom have announced a new limited edition Monster Hunter-themed PS4 Pro. The console is set to be released this December, and sports a sleek black design with a silhouette of one of the game’s most iconic monsters, the Rathalos. The only color on the console itself is in the form of fire coming from the Rathalos’ mouth as it prepares to attack.

The controller is probably the coolest part of this custom design; sporting a wine-red base, the controller is adorned with markings that serve to remind you of the Rathalos once again. On the right-hand grip is a small logo for Monster Hunter World.

That’s not all that was announced at this section of the Sony press conference, though: A release date for Monster Hunter World was also announced at January 26, 2018. Very soon, considering the game was only announced back at E3. This means that the PS4 pro will be releasing just before the game on December 7, 2017, so anyone wanting to get the PS4 for the sole purpose of playing Monster Hunter will have plenty of time to do so.

There’s still plenty of news coming out of TGS, so keep your eye out on Twinfinite for more!