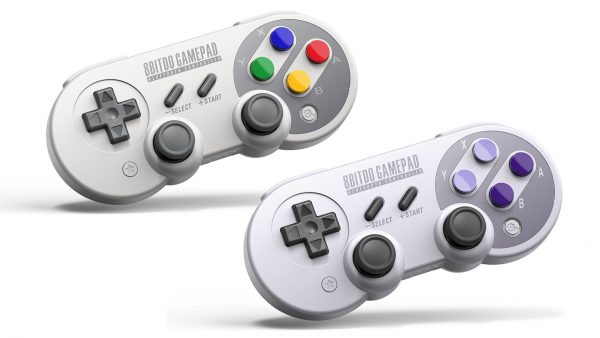 While we still don’t know when the Nintendo Switch will be getting a Virtual Console, 8Bitdo is wasting no time getting the controllers ready for it. The company is recognized for its line of retro-inspired controllers, and the upcoming SF30 Pro is continuing that tradition.

The SF30 Pro is an update on 8Bitdo’s SF30 controller, and it adds features that definitely warrant an upgrade. The Pro features a few new Nintendo Switch friendly features, such as screenshot and home buttons and USB-C connectivity. For more general use, the analog sticks have been improved, motion controls have been added, and the controller has better compatibility and functionality with D-Input and X-Input applications.

It’s a tough choice between the two versions of the SF30 Pro that will be offered. One is sporting the classic North American SNES color scheme of gray and dark gray with purple and light purple buttons. However, I’ve always been partial to the rainbow buttons that the SNES received in Japan and Europe.

You can use 8Bitdo’s SF30 Pro controller on Android, iOS, PC, Mac, and of course Nintendo Switch. The controllers will be available starting December 10, but you can preorder them now on Amazon.