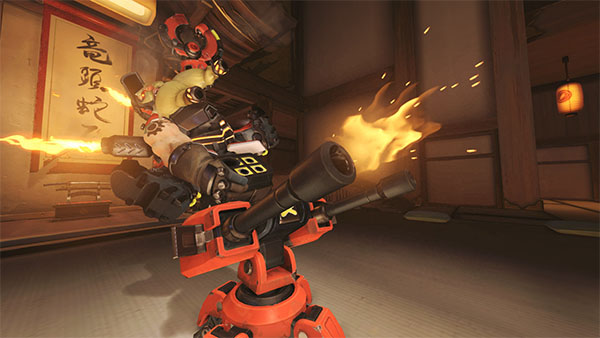 It’s a wonderful day in Hanamura. The sun is shining, bullets are flying and your team has successfully captured the first point on the map. Your team, which has had no problem dealing with the enemy team so far, forms up and prepares to make a push for the second and final point. The enemy’s defenses are no match for your team’s composition as, yet again, your team happily lands in the middle of the capture point. This time around, however, things are different. One by one your teammates are dropping like flies but your attacker is nowhere in sight. Their bullets, on the other hand, are easy to spot but impossible to stop. A ruthless stream of bullets comes flying from the wall and eliminates the vast majority of your teammates or forces them off the point.

This is the unfortunate reality that a lot of Overwatch players are still facing as they are continuously being mowed down by unreachable Torbjorn turrets buried deep inside the walls on Hanamura. If this glitch sounds familiar to you, it’s because this glitch has been plaguing the game for quite some time now. Two months ago a Reddit user posted a video clip of the glitch and urged Blizzard to do something about the frustrating bug and the players who choose to abuse it. It was then that Blizzard’s Bill Warnecke commented on the post and assured players that the problem would get addressed soon.

“I’m not certain what the status of the issue is but I’ve sent this over to QA to make sure it’s fixed as soon as possible,” Warnecke wrote. “We take exploits like this seriously. Please do not abuse this bug. If you’re in a match with someone who does abuse this please report them. Apologies to anyone who had been in a game and affected by this.”

Overwatch players were hopeful that the bug would be fixed soon. But, again, that was two months ago. Blizzard has rolled out some patches to the game since then but it turns out the glitch remains.

Yo @PlayOverwatch@Blizzard_Ent y'all need to patch the 2nd point on Hanamura… Torb was killing us through the wall. #overwatch#PS4pic.twitter.com/vKamUoRAcC

Twitter user DynamiteJimi shared a video of a recent game where his team was yet again met by a well placed turret in the wall that his team could do nothing about. Several players have been sharing videos and screenshots online of their own run ins with troublesome wall turrets but, so far, a patch hasn’t removed the bug from the game. Warnecke’s message about reporting players discouraged many Overwatch fans from exploiting the bug but there seems to be very little a team can do when they come across a player who has no problem breaking the rules.

DynamiteJimi’s other teammates reported the enemy Torbjorn but continued to be shredded by the hidden turret. Fingers crossed that when Doomfist comes into the game he will also be accompanied by a fix for this extremely irritating bug.