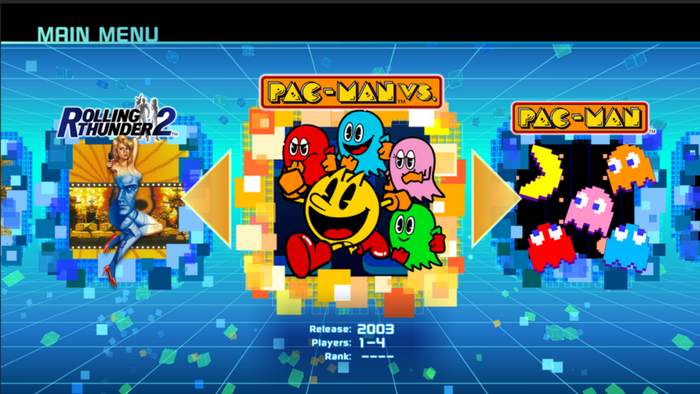 Namco Museum will be launching for the Nintendo Switch this July for $29.99, bringing a gallery of familiar Namco titles with it as well as Pac-Man Vs., a Pac-Man game developed by none other than Nintendo’s Shigeru Miyamoto.

Namco Museum features Pac-Man Vs., Pac-Man, Dig Dug, Galaga, Galaga ‘88, The Tower of Druaga, Rolling Thunder, Rolling Thunder 2, Sky Kid, Splatterhouse, and Tank Force, all of which can be played by turning your Switch on its side to better emulate the way you might have played this collection of retro games back in an arcade.

Pac-Man Vs. is the obvious draw here, having been released only on GameCube, Nintendo DS and mobile devices during its last go-around. It’s a multiplayer-centric title that requires two Switch units for players to control up to three ghosts on one Switch and Pac-Man on the other. Three players basically cover the role of the ghosts and the other player is Pac-Man as they navigate each maze to get away. It’s a fast and frantic version of the classic game, and if you have a couple of systems (and friends) to play with, it should be a good time for all.

Hopefully this iteration of Namco Museum will take cues from the older versions and offer an actual museum-like experience in addition to the games it comes with, where you could not only learn about the games you were playing, but check out tidbits pulled straight from history, too.

If you’re interested in picking up a copy of the game, it’s dropping on July 28, and you can check out the new trailer below. Really, don’t sleep on Pac-Man Vs. though, as it’s one of those fun titles that really makes sense for the Switch, like many of the ports it has since welcomed into its fold.