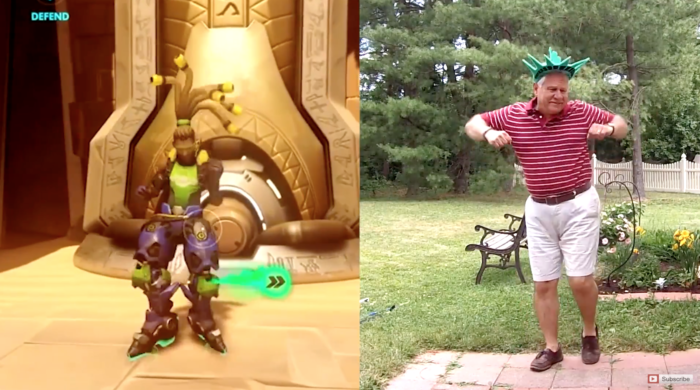 The same viral father that took the Internet by storm with his reenactments of Super Smash Bros. taunts is back at it again. YouTuber Nick Luciano blessed the Internet about two years ago when he filmed his dad doing his best to bring the Super Smash Bros. taunts to life. Since then, Luciano has been uploading frequent videos of his father reenacting a variety of video game taunts, victory poses, fatalities and, now, Overwatch emotes.

As usual, Luciano’s father is incredibly entertaining and proves why he’s easily one of the coolest dads of all time. While there are some emotes that Luciano’s dad does a pretty solid of reenacting (like the Reinhardt emote complete with a weed whacker prop), the real joy comes from the ones that aren’t quite as successful. When it was time for him to give his best Pharah impression, he simply couldn’t get a hang of twirling his faux rocket launcher. As for the Junkrat juggling act? It took a few attempts for him to pull it off without erupting into laughter or hitting himself on the head. And who can’t see the comedic value of an old man reenacting any Widowmaker taunt?

The video is an entire two minutes and 30 seconds of pure hilariousness that will forever change the way you look at your favorite heroe’s emotes. Unfortunately, however, there are some heroes missing from the list. You won’t get the chance to see Nick’s dad impersonate Sombra, Ana, Orisa, D.Va, Mei, Genji or Zenyatta. Fortunately, the Symmetra and Lucio emotes were priceless enough to make up for it all.