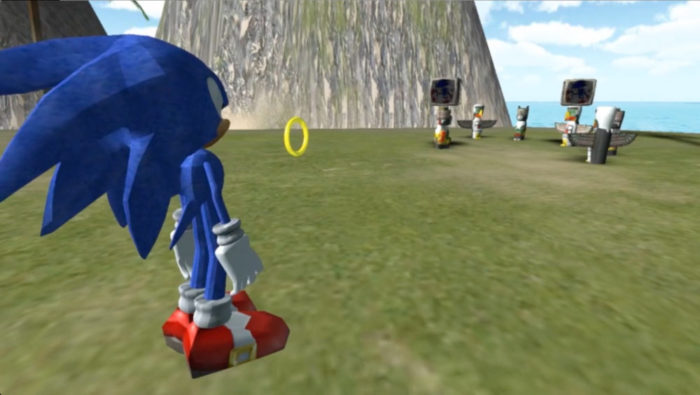 Update: Big Sky has pulled down the video and page showing the proof of concept and detailing it. Original story follows.

Sega has never quite been able to translate Sonic the Hedgehog’s long-since-passed 2D glory days into successful 3D titles, but what’s a hedgehog to do? Try his hand at virtual reality games, apparently.

Developer Big Sky VR has released (very) brief footage of a proof of concept Sonic VR game it worked on for Sega at some point. The footage, which is very raw and very far from representing any sort of finished product, shows 17 seconds of an extremely jaggy Sonic standing around in a world with a few gold rings and other Sonic staples strewn about. A whale leaps out of some water at one point, but the world is otherwise barren.

“Big Sky developed a proof of concept for Sega to help them bring their icon Sonic the Hedgehog to the world of Virtual Reality,” reads the developer’s website. “In this puzzle game experience, Sonic escorts our user along an adventure that takes him across land sea under volcanos and above the clouds that’s true to Sonic form.”

Big Sky VR would have been an interesting partner for Sega to choose for a Sonic virtual reality title. The company describes itself as “a digital production studio specializing in immersive media applications.” It works with “agencies and brands to create 3D simulated environments that are fully realistic and interactive.” The studio’s other projects, such as a recreation of sets from the TV show MASH and interactive real estate tours, could more accurately be described as VR experiences than video games.

Twinfinite has reached out to Sega about Big Sky’s work on the Sonic VR concept and will update this story should they issue a response.