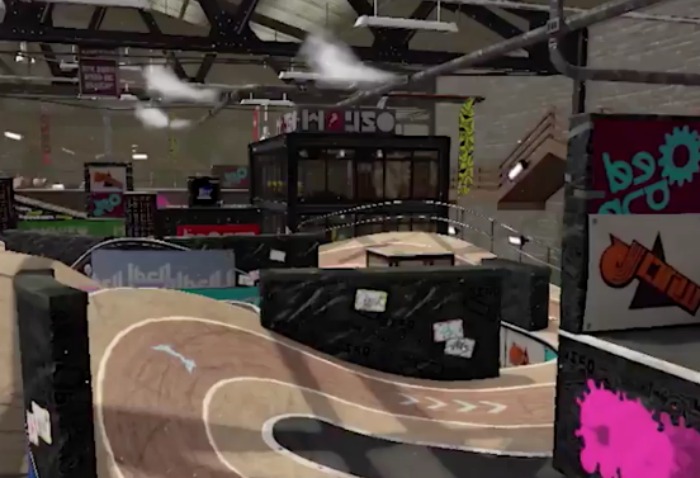 Nintendo opened up its Splatoon 2 beta testing doors last weekend with the Splatoon 2 Test Fire. These test fires were limited to set times, and players could access the download files that were available from the eshop for quite some time prior. This allowed players to gain some first-hand experience with the game before its official release later in 2017. Beta testers were able to get a feel for the new how the Switch would handle motion controls and the necessary precision camera angles needed.

This morning during the Go4Splatoon Grand Final held by ESL Gaming in Paris, Hisashi Nogami, the Producer of Splatoon 2, revealed a new stage that will be playable in the upcoming game: Humpback Pump Track. Sticking with the aquatic naming conventions that the first game did, Humpback Pump Track is an indoor BMX style race track, complete with ramps and curvy ups and downs. Straightaways have the potential of giving squids a rad speed advantage as well. (Also, you could catch some sick air off those ramps and land some sweet kills.)

My impressions of the stage remind me of a mix of the Ancho-V Games and Blackbelly Skate Park stages in the first game. There looks to be lots of high areas that will be good for sniping and picking off enemy squidlings as well as large expanse areas that are perfect for rollers to cover a lot of ground with.

What are you impressions of the new stage? What other features are you looking forward to or are hoping to see in the game’s future release? Let us know in the comments below!