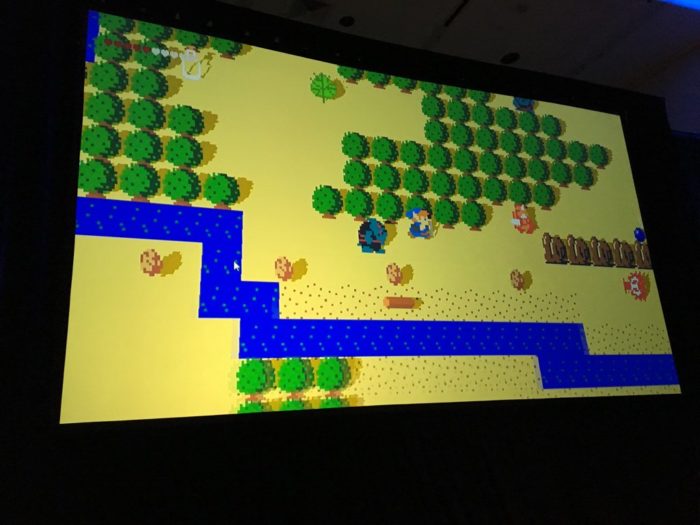 Turns out that The Legend of Zelda: Breath of the Wild had to go through some pretty whacky prototypes to arrive at the final product. Nintendo of America’s Twitter account is showing off some images of past ideas for the latest Zelda shown at GDC by Hidemaro Fujibayashi, Takuhiro Dohta, and Satoru Takizawa from the Breath of the Wild development team.

One image shows off some scrapped outfits and items for Link, and it looks like Link could have ditched Epona for a newer model and gone with a motorcycle to tear around the lands of Hyrule instead. That or chill under the Deku tree while playing his golden electric guitar while wearing a…tracksuit? OK, Nintendo.

Another shows off a tantalizing look at Nintendo going back to its roots by making Breath of the Wild a pixelated 2D adventure very similar to the first few entries in the series. We can only hope the Switch will have a 2D Zelda released sometime during its lifespan, as Eiji Aonuma recently told Game Informer that it’s, “defiantly a possibly”. Turns out the 2D art in this prototype is actually 3D in order to run the engine successfully in the background.

The quickest way to bring these ideas to life, and present it to the team, a 2D prototype of #Zelda was created. pic.twitter.com/OJnE4yt8Oi

Finally we get to see a route all Zelda fans have secretly hoped the series would experiment with, a full on alien invasion aptly titled Hyrule Wars.

Before there was #Zelda: Breath of the Wild there was.. Hyrule Wars? And an alien attack!? The early concepts were definitely wild. pic.twitter.com/0vNYFvtrsQ

Maybe tracksuit Link will be the star of the next Zelda game on the horizon, we can only hope.