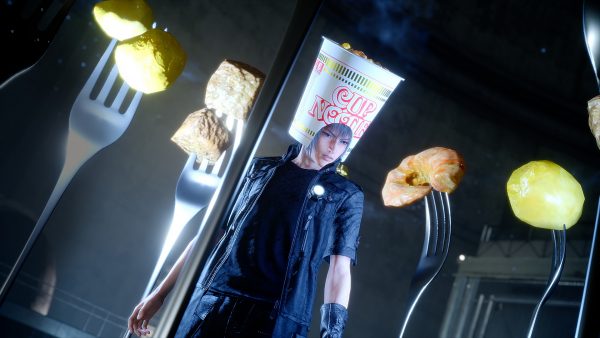 We know the cast of Final Fantasy XV is crazy about Nissin cup noodles, but this might be taking it a little bit too far. Nissin has just announced that anyone who purchases their Final Fantasy Boss collection of cup noodles will get to download the Cup Noodle Headgear for Noctis to wear in the full game.

For those who may not be aware, the Boss collection is essentially a lineup of Nissin cup noodles that feature artwork of the main bosses from the mainline Final Fantasy games. The collection costs 6,084 yen and it’s only available in Japan, though if you really wanted that new helmet for Noctis, I suppose you could always import those noodles or something.

Final Fantasy XV is now available on the PS4 and Xbox One. The game will be getting three separate DLC packs for Gladio, Prompto, and Ignis. The infamous chapter 13 is also getting a story update soon. What are your thoughts on the new headgear? Let us know in the comments down below.