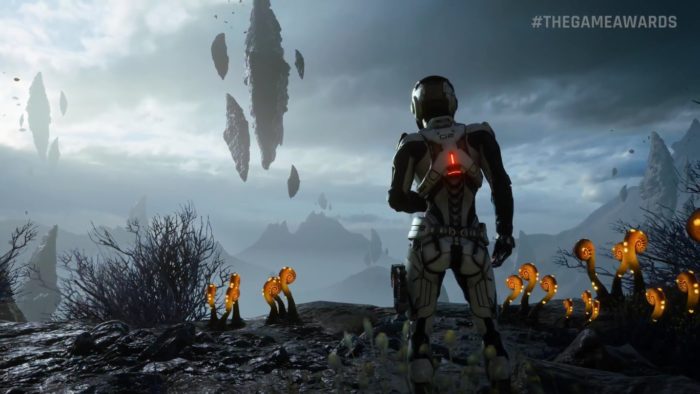 The gameplay trailer showcased a number of different features from the upcoming sci-fi RPG. Andromeda will see players adopting the role of a pathfinder in a new galaxy as they seek out a new home for humanity. You’ll check out planets from your ship, explore them on foot, and utilize a number of different gadgets at your disposal to uncover the true story of each one.

In Mass Effect: Andromeda, resources are scarce across the galaxy and some planets are hazardous and sometimes completely uninhabitable. While you’re exploring the galaxy, you could find that some planets have a more sinister past than others, with factions fighting over every valuable scrap. Whether or not you actually engage in combat with these factions is entirely up to you.

The trailer also gave us a quick look at the female protagonist exploring what looked like one of the game’s hub cities, as well as a quick glimpse at her conversing with an NPC. The action then quickly shifted to a quick rundown of Mass Effect: Andromeda’s combat, with jetpacks, powerful energy weapons, and a giant alien creature munching down on the protagonist.

Mass Effect: Andromeda is due to release sometime in 2017, though no confirmed release date has been given as of yet.

What did you think of the new gameplay footage for Mass Effect: Andromeda? Let us know down in the comments below.