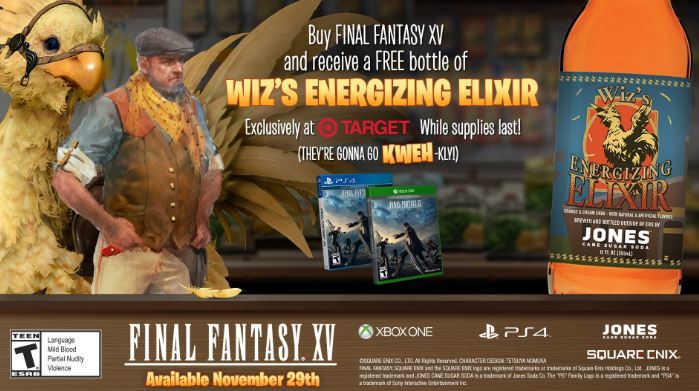 Final Fantasy XV finally arrives on the Xbox One and PS4 tomorrow, and they hype is real. Today, Square Enix has announced that Target will be selling soda (or “pop,” if you prefer) called “Wiz’s Energizing Elixir,” named after the Chocobo post in the game where you can rest your feathery beast and acquire items.

Final Fantasy XV’s Elixir will be the first FF-themed soda to ever be sold in America, and when you pick up your copy of the game at Target, you’ll get a bottle of it for the lovely price of free. But like with Fallout 4’s Nuka-Cola, the drink will only be around while supplies last, so best to get it while the getting’s good. If you’re not getting the game but still want the drink, it’ll just cost you $3, but it’ll only be available at Target.

While you wait to pick up Final Fantasy XV (or for it to load on your system), go ahead and read our review.