This week, CD Projekt Red launched the closed beta for Gwent: The Witcher Card Game, and it’s changed quite a bit from the original minigame featured in The Witcher 3. There’s tons of new cards, new sets of strategies, and a new way to make nice with your enemies.

After each match of Gwent, both players are given the option to send their opponent a “Good Game.” Doing so pops a big GG onto the other player’s end-game screen, as well as a small gift of either 5 Ore or 5 Scraps, in game currencies used to buy and craft new cards. It’s like a friendly handshake, except after the shake, everyone gets money. 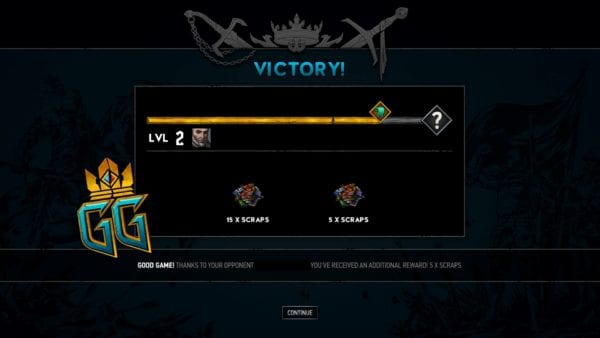 Of course, you could not give a GG and not endow your enemy with gifts. Playing the closed beta so far, though, it seems nearly every player is in a giving mood, and CD Projekt’s addition has been a bit of feel-good for all.

Gwent: The Witcher Card Game’s closed beta is planned to run until Spring 2017, although the company notes in their FAQ that this is a rough estimate. You can still sign up over on the Gwent website, as waves of codes will continue going out through the beta. CD Projekt Red intends to release the full game, complete with a single-player campaign and AI Skirmish modes, when they feel “ready to give you a game that rocks!”