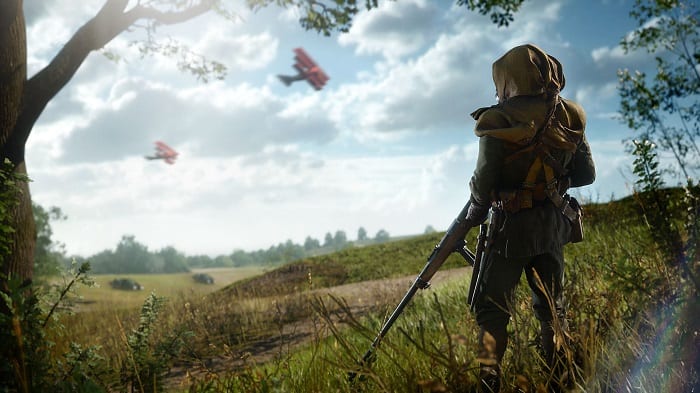 Battlefield 1 Early Enlister went live on Tuesday the 18th, but we’re still over 24 hours before the October 21st launch of the Standard Edition. With so little time left, where can you find Battlefield 1 deals or promotions? Here’s the good news: if you want some bonuses beyond the standard pre-order DLC pack, there are still some good deals to pick-up.

The Discounts: PC gamers are getting the best price with discounts up to 23% off. The largest price break is GMG with a (now $47.99), but we should note that GMG is not offering the Hellfighter pre-order bonus DLC. Conversely, DLGamer is a good alternative to GMG with $47.99 but you still get the Hellfighter pack plus keys are currently being sent for Origin pre-load. Two solid discounts from reliable/popular digital retailers.

The Bonuses: Console gamers have the option for $10 gift cards. The place to be for Xbox One gamers is the Microsoft Store, where you can pre-order and pick up a bonus $10 Gift Code for either a physical box copy or an Xbox One download code instantly delivered so you can partake in pre-loading. PS4 gamers will have to settle for a physical copy for a $10 Reward at Best Buy. Also notable, if you’re a paid Gamers Club Unlocked member at Best Buy you get 20% off Battlefield 1 cutting the price to $47.99.

If you plan on buying Battlefield 1 digitally, pre-loading may be the way to go. It’s a massive game. For Xbox One gamers, expect it to take up 42.7GB of hard drive space, which is a tenth the size of a 500GB Xbox One console. PC gamers are reporting a 40.2GB download size and 46GB of space after unpacking. For comparison, installation on the PS4 version will take up 48GB of space.

None of the deals above striking your fancy? Check here for continuous update on the best Battlefield 1 deals as we edge closer to release later this week.