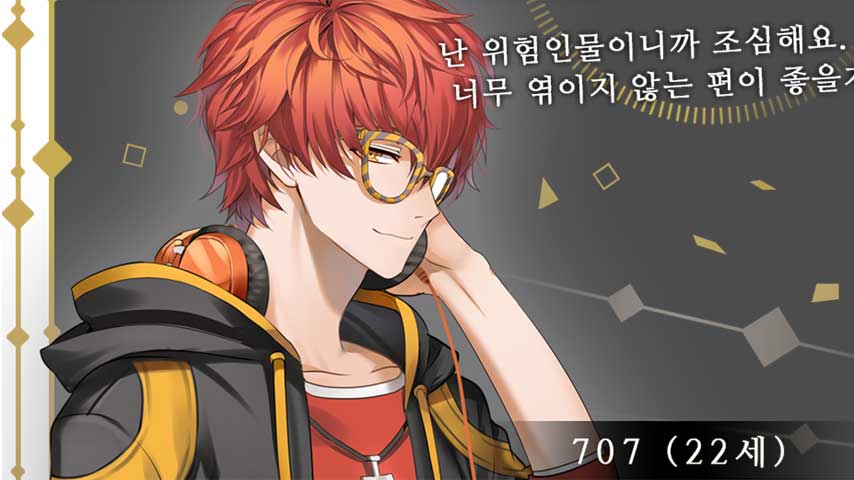 Before you can unlock 707’s good ending in Mystic Messenger, first you have to unlock his route in the game. In order to this, you have to gain the most number of Hearts with him.

I advise focusing on getting his Hearts during the first four days of the game, and ignoring the rest of the characters to increase your chances of getting locked into his route. Also, do note that his route is only available in the Deep Story mode.

To gain Hearts with 707, simply play along with him and joke around when he isn’t being serious. He’s one of the most easygoing characters of the bunch, so collecting his Hearts shouldn’t be too difficult.

There will be times when he starts to get a little more serious, however, and you need to know when to tone down the jokes.

After you’ve unlocked his route, you can continue to joke around with 707 when he does too. Soon, he’ll start getting more serious and also start opening up to you about his troubles.

When he does this, stop cracking jokes, and start providing him with more emotional support.

Occasionally, the other characters will talk about him in separate chats, but you should always take his side and defend him by saying that he has a lot to deal with at the moment. Basically, just read 707’s emotions, and be there for him when necessary.

If he seems to be in a good mood, just play along with him.

These general rules should help you out with getting 707’s good ending in Mystic Messenger. If you have any other suggestions for getting this ending, feel free to sound off in the comments down below.