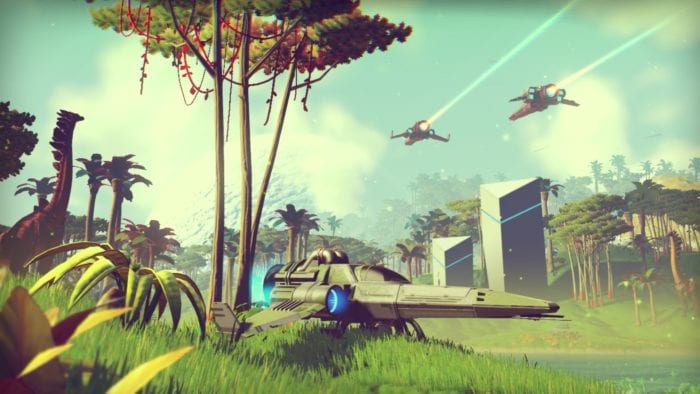 Hello Games’ Sean Murray recently shot down the idea that No Man’s Sky is a multiplayer game, but that hasn’t stopped players from trying to prove him wrong. Two players in particular, “Psytokat” and “TheGalacticCactus,” realized they were in the same star system and went about trying to prove Murray wrong by meeting up on the same planet.

When TheGalacticCactus realized the very same planet he was on had been previously visited by user Psytokat, who was four systems away at the time, TheGalacticCactus messaged him asking if they could attempt to find each other in-game. The two began traveling toward the same spot and streamed the attempted interaction on Twitch. Despite the pair simultaneously being in the same space stations and interacting with the same NPCs, though, they were never able to see each other in-game.

As Polygon notes, the planet in question was experiencing daytime for one of the players and daytime for the other. This could mean the players were on different servers or that the game, which procedurally generates its planets, is able to create two seemingly identical but planets that are not actually one and the same.

Normally, two players being in the same spot in a game wouldn’t be that big of a deal, even in large open-world games. No Man’s Sky is different: it has over 18 quintillion planets, which Sean Murray estimates would take 584 billion years to explore if new planets were found at a rate of one every second. Murray also reiterated on Twitter Monday that No Man’s Sky “is not a multiplayer game” and that the chances of two players crossing is “pretty much zero.”

How then does he feel about a couple of random players ending up on the same planet within a day of the game’s release? Legitimately surprised, from the sounds of it.

“Two players finding each other on a stream in the first day — that has blown my mind,” he tweeted. And yet, it seems Hello Games is attempting to foster just this kind of thing. “We added a ‘scan for other players’ in the Galactic Map to try to encourage this happening. We wanted it to happen — but the first day?”

Murray attributes the occurrence to “too many” people playing at launch. “More than we could have predicted.” So many people have been playing the game that more than 10 million species had been found as of earlier today. For reference, man has identified fewer than nine million species on Earth to date.

Continuing, Murray praised his team’s “amazing” network coders for making this type of discovery possible. He also noted that Hello Games wants “people to be aware they are in a shared universe. We added online features, and some Easter Eggs to create cool moments.”

The real question many users on Reddit are wondering, though, is if players ever go beyond “Easter Eggs” and “cool moments” and somehow see each other in the game. Murray’s comments and the experience of Psytokat and TheGalacticCactus seem to imply that such an event is not possible, but that hasn’t stopped players from asking the question. One Reddit user cited an earlier comment Murray made while appearing on Late Night with Stephen Colbert that players needed to see each other in-game in order to figure out what they looked like. Despite his more recent revelation that No Man’s Sky is not a multiplayer game, players are unlikely to give up on their quest to interact with each other any time soon.