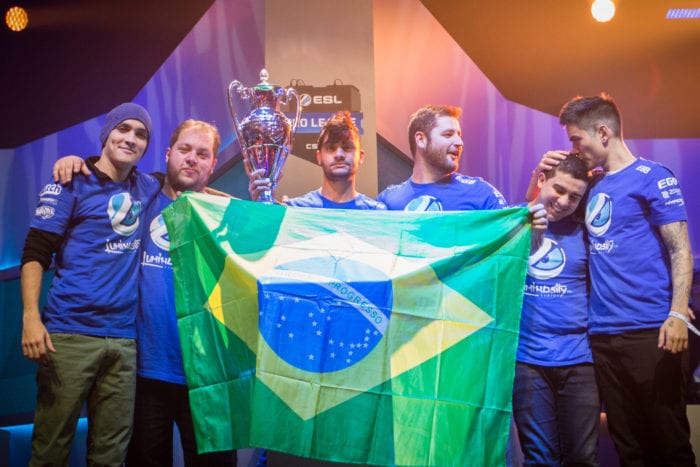 Wednesday marked the beginning of the ESL Pro League‘s season three finals for Counter Strike: Global Offensive in London. Of the eight qualifying teams that duked it out over the weekend, it was Brazil’s Luminosity Gaming and the French underdogs, G2 eSports, who made their way center stage to face off in a best of 5 on Sunday for their share of the huge $512,000 prize pool. Although neither team had won the championship in the past, it was clear that both teams were ready to give it their all and walk away from the finals with the win.

Overpass was the first map Luminosity and G2 faced each other on and through some incredible defense with a double AWP setup, G2 was able to lead the half 9-6. Luminosity managed another 4 wins after the half using some aggressive tactics. However, multiple crucial round losses led to a very weakened economy for Luminosity which G2 was able to exploit for the map win with a final score of 16-10.

The second map in the finals was the very technical Train where Luminosity managed to pull it together to dominate the first half with 11 wins and only 4 losses. G2 once again proving to have a strong defense on CT-side, snagged 9 more wins, however it just wasn’t enough as Luminosity’s coldzera led his team to victory with an astounding 32 kills and only 16 deaths. Luminosity officially won the second map 16-13.

With the score tied 1-1, the third battleground for these CS:GO titans was Cobblestone. The first half stayed very close with both teams trading wins with each other, but through some aggressive offense and great coordination Luminosity was able to lead the half 8-7. Taking a page from the Luminosity book, G2 came back from the half with extremely effective aggressive offense with G2’s ScreaM and bodyy pulling off some tremendous plays to help G2 close out the map on a 6-game win streak ending it at 16-10.

It looked like it might have been all over for Luminosity as G2 only needed one more win for the championship and they were favored on the next map, Dust2. You could tell G2 had serious experience with his map as they took 6 very early wins on offense and managed to keep the momentum leading into the half  9-6. Domination was the name of the game in the second half as Luminosity’s team captain, Fallen, gave G2 no breathing room. Using some double AWP setups and beautifully placed grenades, Luminosity shut the map out 16-11.

It was a five game final with the last map as Inferno. Both teams played extraordinarily well keeping the score mostly tied through the first half. Luminosity played a slightly better half with some slow, tactical marches up A and aggressive pushes at B to barely win the half 8-7. However, it was clear G2 was not going down without a fight. With a 3 round win streak, G2 was able to push their way to 15 wins, but was unable to secure the last and Luminosity’s fer and fnx led their team into overtime. Overtime was tense and explosive as Luminosity won a fast 3 rounds. G2’s team captain, shox, provided a glimmer of hope with an incredible quad-kill win on B, but with an impressive B take on the following round Luminosity finished the map up and secured their title as ESL Pro League Season 3 Champions.

Luminosity’s TACO with a cliche, yet charming celebratory trophy kiss.

Congratulations to the champions Luminosity Gaming. Both teams played some of the best Counter Strike: Global Offensive ever witnessed and definitely proved how much they deserve to be there. Season 4 will no doubt be truly exciting and something to very much look forward to. Click here to check out all games in the ESL Pro League Season 3 Finals and be sure to let us know what you think by leaving a comment below!