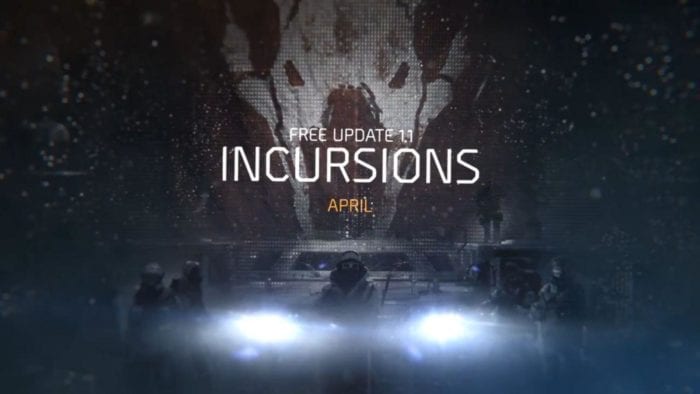 The first major content update has dropped for The Division, meaning the very first incursion is now live. Called Falcon Lost, the incursion can be found in the lower right-hand corner of your map.

When you spawn into the game, starting in a safehouse, it won’t appear. To get the marker on your map, venture outside and it will pop up right away as long as you are level 30. While scrolling over it will show the usual minimum level requirement, difficulty and rewards, the mission profile now also lists minimum and recommended gear score at 140 and 160 respectively. For comparison, the daily challenge mission has been set to a recommended gear score of 130.

Every piece of max level gear in The Division now has a gear level. What were previously level 31 high-end pieces of equipment now sit around 180, while what was previously level 30 high-end equipment weighs in with gear levels around 160. Your character’s gear score is an average of all nine pieces of gear on your character, the number found in the lower right hand corner of your character screen or in the upper left hand corner of your map, next to your level and name.

If your gear score isn’t quite high enough, then the same things you have been doing to get gear since launch will still be the best ways to raise it. Running hard and challenge modes, taking the plunge into the Dark Zone, or saving up those phoenix credits to buy a shiny new gun will all lead to a better gear score.

On the other hand, if you find yourself comfortably within the requirements for the incursion, you’re all set to go. The fast travel to Falcon Lost is disabled at first, so simply fast travel to the Power Plant mission and run to the right from the spawn. Just down the street you will come to the incursion starting area.

For more on the Falcon Lost Incursion and all the new content now live in The Division, keep checking back right here on Twinfinite. Happy hunting agents.

More on The Division

Comments
Continue Reading
Related Topics:Falcon Lost, get started, How to, How to find, Incursions, MultiPost, raids, The Division, Ubisoft, what, where