Champion Gundyr is an optional boss in Dark Souls III, and you can find him in the Untended Graves, which is also an optional area not required to complete the main game. As his name (and boss location) suggests, Champion Gundyr is very similar to the Iudex Gundyr boss fight you went through at the very beginning of the game.

During the first phase, his move set is exactly the same as Iudex Gundyr’s. He’ll swing his halberd in a wide sweeping arc in front of him, complete with two and three hit combos. He also has that same thrust attack where he stabs forward before following up with a shoulder charge to the side. Be careful of his grab attack where he’ll send you up in the air with the halberd before throwing you down to the ground. 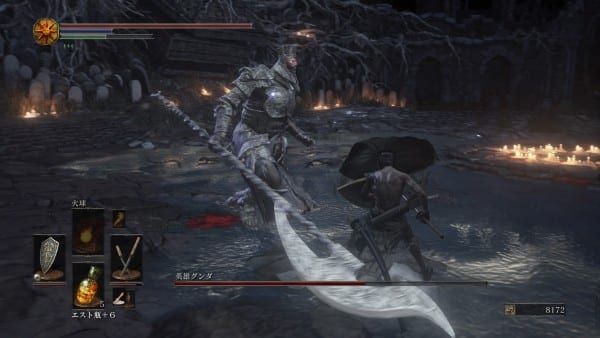 When you get his health down to 50%, Champion Gundyr doesn’t become corrupted like Iudex Gundyr did. Instead, his eyes glow red and his attacks become even more relentless and aggressive. His moves are the same, but he’ll attack much quicker than before. The best strategy here is to stick close to him so that most of his swings will miss, but keep your shield up to block the occasional close range attack. Circle strafe around him as he executes his combos, and only attack at the end of each of his strings. When you see him wind back his free hand to get ready for the grab attack, roll away to out range it.

Champion Gundyr isn’t a particularly tough boss fight as long as you don’t get greedy. If you’re still having trouble with his second phase, you can summon the nameless katana master if you defeated him outside Firelink Shrine.