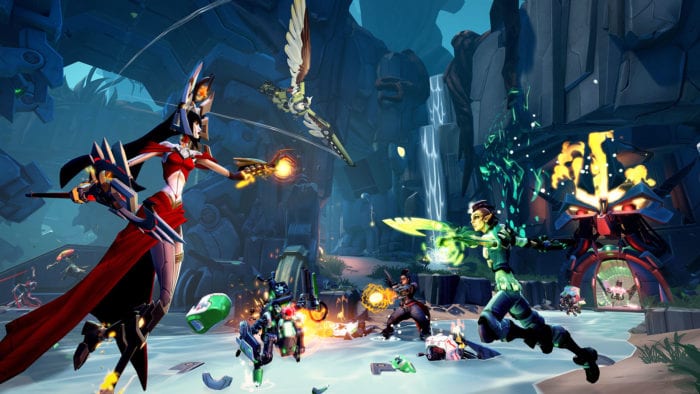 Battleborn, the hero action shooter from Gearbox, is heading to your favorite platform next week on Tuesday, May 3. If you were enjoying the previous beta sessions and you’re eagerly waiting for a return to one of the 25 heroes, retailers are dangling extra pre-order incentives this week to win over customers. As of writing, we’ve found Battleborn deals ranging from straight-up discounts to bonuses such as gift cards and speedier shipping.

The best deal for the PC Steam version of the game would be at GMG, where you can knock up to 20% off either the Standard Edition or the Digital Deluxe of Battleborn. This takes the price down to $48 and $60, respectively. Just use coupon code DEALZON20 during checkout and you’re golden.

On the console front, Dell.com is offering up their usual $25 eGift Card incentive for pre-ordering. This gift card is good towards any future purchase on Dell, so if you’re planning to pick up another AAA title in the near future, this is a great deal. The computer retailer is also offering up free next business day shipping on pre-order titles, so you’ll have the game in no time right after release.

If you’re planning to pick up Season Pass content, you’re better off just buying the Digital Deluxe right now given you’ll net more savings (slightly cheaper list price, versus only getting a 20% off discount on the Season Pass itself). Gamers in the UK/EU can also find similar discount at GamesPlanet, where the game is priced at £31.99.

All the pre-order deals listed above will include the Battleborn “Firstborn” pre-order bonus pack. Which are just cosmetic character skins that look cool.

For those on the Xbox One, if you pick up a copy from the Microsoft Store by 10AM Friday morning, you’ll receive free release day delivery plus a $10 Xbox One gift code. Missed the cutoff date? Dell, as mentioned earlier, is offering free next business day shipping – though, depending on your location, that doesn’t necessarily translate to getting Battleborn to your front porch on release day.

Finally, if you have Best Buy’s GCU or Amazon Prime membership, those would be the best place to pick up a copy of Battleborn given you’ll net the 20% off discount, and for those buying at Best Buy, you’ll also receive a $10 rewards certificate (good for anything at Best Buy).

Let us know if you’ve spotted some other deals from legitimate retailers that we haven’t mentioned here and we’ll toss them in for completeness!