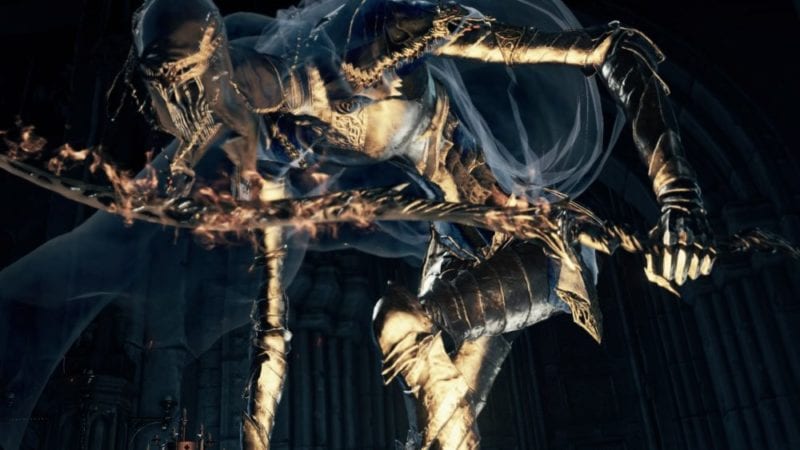 The Dancer of the Boreal Valley is one of the toughest bosses you’ll come across in Dark Souls III. When the fight first starts, she’ll move around the arena slowly with only one flaming sword in hand. You’ll be tempted to go in for free hits, but I advise you to keep your shield up and wait for her to make her move.

During the first phase of the fight, the Dancer will attempt to hit you with broad slashes of her sword. You can either block these attacks, or simply roll through them. Whenever she drags her sword on the ground, she’ll summon flames around her which can damage you, so stay back when she does this. Every now and then, she’ll thrust her sword into the ground and perform a flaming AoE attack, so you’ll want to stay away here as well. Your best opportunities to attack during the first phase is right after the AoE attack cools down, and at the end of her attack strings. She’s pretty slow in this phase, you just stay behind her and attack after she does.

There is one extremely dangerous attack that you need to watch out for in phase one too. Her right hand, which will be empty during this phase, can grab you if you’re not careful. The Dancer will perform a grab attack if you’re in range, and slam you into the flaming ground. My character had 20 points in Vigor, so my HP wasn’t very high, and I can confirm that you’ll suffer an instant death even at full health if you get grabbed. If you’re in Cinder form, you’ll likely survive with a very small sliver of health. I ended up putting a few more points into Vigor after that, but it’s still a very risky move to tank that grab while getting more hits in. When you see the Dancer wind back her free hand, either get behind her, or get away.

Once you take her down to half health, she’ll gain access to another sword. The Dancer will no longer perform the grab attack in this phase, but her sword attacks become much more dangerous, and she also becomes a lot more aggressive. Be sure to watch out for her spinning attack as she uses both blades to literally dance around the room in a spiral. The good news is, she won’t home in on you with this attack, and you can dodge out of it pretty easily. However, if you get caught in it, she’ll deplete your stamina bar very quickly if you’re blocking with a shield. And since this spiral attack contains about eight or nine swings, getting caught in the sweep will very likely spell instant death for you.

She also has a new move where she positions both blades on the ground and swings them upwards in a long arc. You can either block this attack, or roll into her to avoid it. Other than that, the Dancer retains her moves from the first phase. She’ll still drag her sword on the ground, do an AoE, and execute broad slashes. The hardest part of this fight is stopping yourself from getting greedy and avoiding getting caught in any of her attack strings. Take this fight very slowly and safely, don’t make any risky moves, and you’ll eventually beat the Dancer of the Boreal Valley.