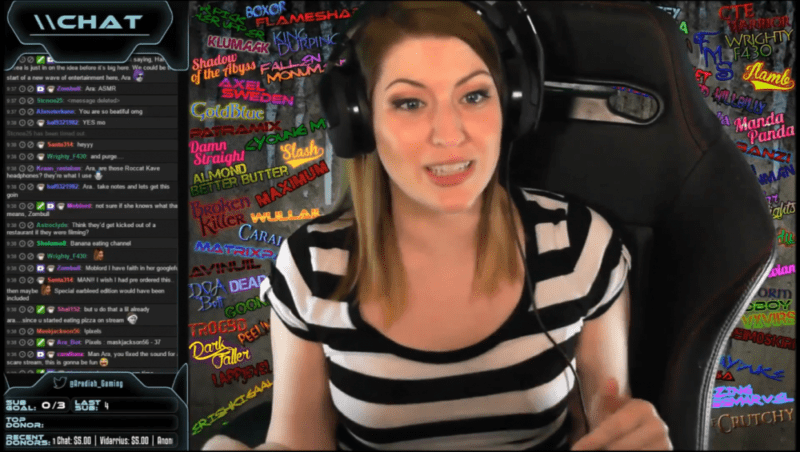 Divorce can be tough, but “Ara_Gaming” fans found you might even lose your Twitch account in the process.

Fans of the Twitch streamer were understandably confused when they tuned into the channel to find someone else hosting. The account had gone unused for several months, when sudden activity sparked renewed interest. Fans were met with a new streamer, Crystal, who had taken over the “Ara_Gaming” account but could not discuss the reasons due to “legal reasons.” Crystal went on to say that Ara had decided to no longer stream, but that she wanted to keep the channel up “so people can still enjoy some of the gameplay while she is no longer streaming.”

This story is further confused by a user going under the name “nanospynet” who claims to be Ara’s husband. The user also claims that Crystal is his cousin and that he won the channel in a legal battle following a lengthy divorce proceeding, with additional stipulations that Ara will not be able to stream for five years through a non-compete clause. When asked about the validity of his assertions, he stated that because the “Ara_Gaming” LLC was filed under both their names, the channel was now simply being rendered completely under his control. He justifies this as fair by saying that she “liquidated” all funds associated with the channel prior to the transference:

Despite this, nanospynet claims that the couple are “still legally married,” throwing some users into doubt over the truth of his positions. Some pointed out it was unlikely she would turn over the channel until after the divorce was finalized. Further questions remain regarding the legality of his statement at all, including questions about Twitch’s terms of service, which claim that the license is “non-transferable” and “non-sublicensable.” How this would impact the claim of an LLC incorporation of the “Ara_Gaming” channel, if at all, remains to be seen.

Regardless, Ara’s fans have stormed twitter with “#aragate” to convey their dissatisfaction. Some users have claimed they have more information forthcoming, but no definitive evidence has surfaced thus far. At the time of this writing, Crystal has not repudiated nanospynet’s claims, and neither Ara nor Twitch have commented.