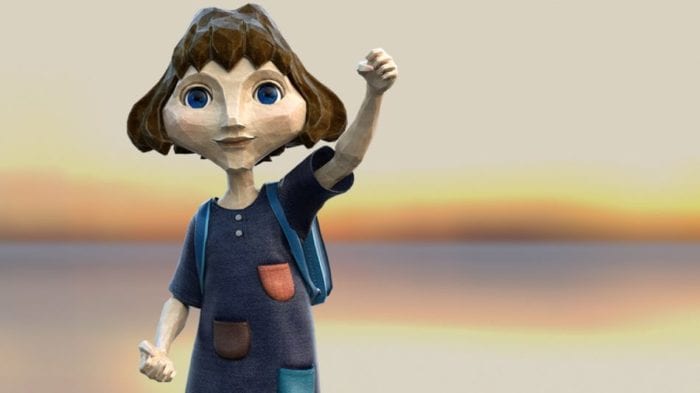 The Tomorrow Children got a lot of attention at E3 last year due to its interesting gameplay-focus on players interacting and working together, but it was the art style which really garnered attention. The strikingly harsh Soviet Union-themed aesthetics are about as far away from the likes of Minecraft you could get, but this is still a game about building. Unlike Minecraft, you’ll must be a good, little Soviet worker and obey the social economic rules of the game before you go mining to the center of the earth.

We got some hands-on time with The Tomorrow Children’s closed beta, which began a young woman who appeared to be a citizen of the Soviet dystopia of the game’s setting. An endless open void was all that surrounded her, save for a small screen ahead. Upon interacting with the screen, a sinister looking man instructed us to go and explore a strange, cube-shaped structure that rises out of the ground. Given the leader’s creepy look, and the fact he constantly gives you commands, it’s safe to say he is the ultimate ruler of this dystopia.

Once you’ve equipped the pickaxe, you can then make your way to the cube-like cave. A bit of exploration will soon yield you a lamp, which is used to guide your way through the dark until you come upon some veins of ore deeper in the cave. Your mined ore can be stored in your backpack, and then you’ll exit the cave and deliver the resources you’ve found.

It’s worth noting that it seems spending too much time in the darkness will cause your character to die, and so you must always make sure you have a lamp with you. Other sources of light can also be found, including some glowing mushroom-type plants you can pick up and carry along with you.

Upon delivering your ore in the designated spot, you can then take the subway into town. Towns are an interesting aspect of The Tomorrow Children. From the looks of things, each town is governed by the players who reside there. To become a resident of a town, you need to build your own house, which in turn requires you to have earned a residence permit. It seems a permit is earned once you’ve gathered enough resources for your creepy leader. For the sake of the beta, you’re given a permit from the get-go.

The catch with towns is that only so many people can live in each one. The first town you enter could be full, so you may need to travel to several more towns before finding one that has space for a new member. Each town has a different name, but it was disappointing to find they all looked very similar. It’s possible that towns will evolve and grow as more players contribute to them, but during the beta they were mostly interchangeable.

Upon finding a nice spot and activating your permit, your house comes tearing up from the ground. On the outside, the residence appears to be identical to everyone else’s, and you can’t actually go in and explore it. Entering your home only brings up a screen which allows you to mange certain things like the clothes you wear.

After building a crib, players can explore the town. Every town was very small and consisted of only a few main buildings. (Again, this may change once more people are around to contribute to building.) Each town seemed to be in the middle of nothing save for large creatures that can be seen in the distance. Stray too far from the safety of your town, and you’ll start to get swallowed by quicksand. All in all, trying to strike out on your own doesn’t seem like a life-friendly approach.

The gameplay trailer shows that at certain points, large creatures will attack your town and you must defend your hard work. None of the strange creatures in the distance seemed to be interested in bothering my town, but I did come upon a machine gun turret someone had crafted. It seems combat will have a significant role to play in this game.

In your town, you can visit a building called The Ministry of Labor, which will give you a certain amount of coupons depending on how many resources you have gathered. You can then use these coupons to purchase new items, such as better pickaxes or lamps to help you mine. Coupons can also be used to cast your vote in your town’s elections. Elections allow citizens to vote on what new projects they want to start working on. If the system works as intended, this could be an excellent mechanic in The Tomorrow Children, but if it falls flat due to lack of engagement, it could become a serious frustration.

That brings us to the online aspect of The Tomorrow Children. During my time in the game, I often saw other players in the world, but I was unable to interact with them in any meaningful way. It wasn’t just that I couldn’t chat with them, it was the fact that players seemed to flit in and out of the world at random. Every time I’d see a player, I’d run up to him/her and they’d almost always disappear in a puff of smoke. A bit like in Dark Souls, you have gestures you can perform to other players in order to express your feelings, but I personally never encountered a player long enough to perform a gesture, let alone work together with them like the good little worker I am.

After exploring the town, you can then start to earn your place in this new society. Perhaps hop on a bus and head to a new location waiting to be mined. Upon gathering as much as as you can, head back into town to reap the rewards of your hard work.

Given the short amount of time we had with the game, it’s hard to reach a solid judgment. Some aspects such as its post-apocalyptic Soviet themed setting have been absolutely nailed, whereas other parts, such as the social interaction, seemed to be lacking. It’s difficult to say whether this is a flaw that will be present in the final game, or whether its something that only occurred due to the limited nature of the beta.

Those of you expecting this to be a new take on Minecraft will be disappointed. Once you’ve gathered enough resources to build a structure, it simply pops out of the ground, there’s no piece-by-piece work required when it comes to construction. Regardless, the communist-style social aspect of the game sets it apart, and should the mechanics of this system prove to hold up, the intrigue  of communal labor, odd as it may sound, could be a major hook for the title.

The Tomorrow Children is currently slated to be released in the first half of 2016 exclusively for the PlayStation 4.