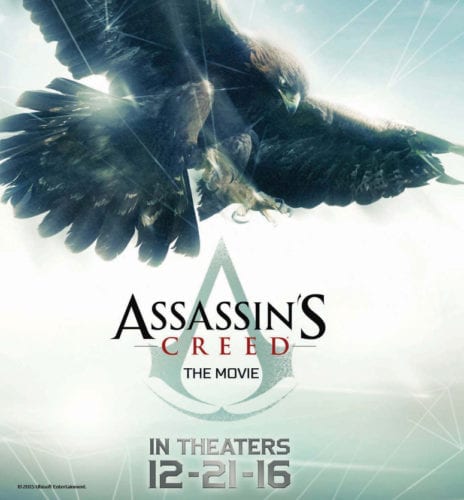 Empire Online has just released a pair of exclusive images for the upcoming Assassin’s Creed film.

In the two images, we see the two different characters actor Michael Fassbender will be portraying: 15th century assassin Aguilar, and his present-day ancestor, Callum Lynch. Both characters are new to the franchise – the filmmakers have opted to not retell Desmond Miles’ story, but rather a new tale set in the same universe.

Pictured above is Aguilar, chained at the wrists, wielding a sword, and (presumably) angry. Behind him is some sort of disagreement.

Pictured below is Callum Lynch, not chained but seemingly inside of a cell, being read to by what seems like a priest from what seems like a bible. Behind him are a bunch of scribbles and symbols, including that of the Knight’s Templar, the primary antagonists of the franchise.

Both characters are in some sort of shackle, looking to the right of the screen, at something they don’t like.

The Assassin’s Creed movie is directed by Justin Kurzel, and also stars Marion Cotillard, Jeremy Irons, and Brendan Gleeson, and will be released on December 21, 2016.

What do you think of the images? Which of the two makes you more interested? And what’s your favorite video game film? Let us know in the comments below!

Altair, Rabbids, Cuphead, and Other Characters Are Being Added to Smash Bros. Ultimate as Mii Fighter Costumes
By Greysun MoralesJanuary 16, 2020