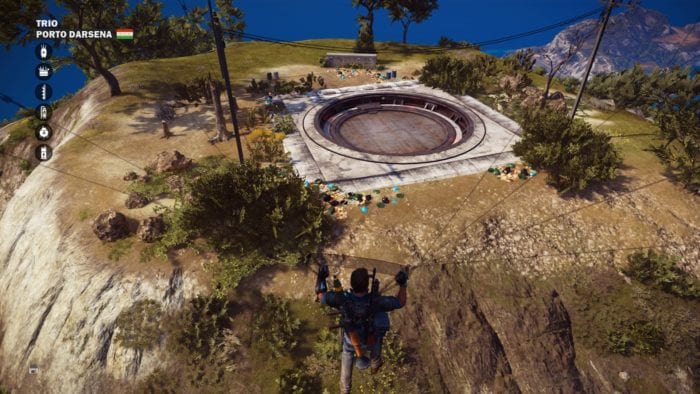 Just Cause 3 has tons of secrets hidden in the massive fictional country of Medici. One of those secrets happens to be a teleportation device that the military is apparently hiding. You can access it if you know the code to unlock the huge vault doors hiding it.

Head over to the location marked by the player indicator on the map above. If you’re worried about the fact that it’s right next to a military base, don’t be. That base is actually located in a cave under the mountain that you will be standing on top of. Not a single soldier will be aware of your presence.

Here you will find a vault embedded in the ground with four buttons nearby. Head over to the buttons and input the numbers in a specific order to get the vault doors to open. The correct order is 1-4-3-4-2-1. (Thanks to OniZombies for figuring that out.)

If you input the code correctly then you’ll hear the vault door (which is actually a missile silo) open. Hurry up and jump in, because although the button presses don’t seem to be on a timer, the door most certainly is. As you fall, you’ll eventually hit what looks like a Stargate from the television series of the same name. It will teleport you to another just like it in Costa Sud, on the opposite side of the map.

Think of it as a free fast travel that can only take you between two specific spots that aren’t really anywhere useful. At least it looks cool.

Have you discovered this easter egg? Seen any other cool things? Feel free to let us know in the comments below.