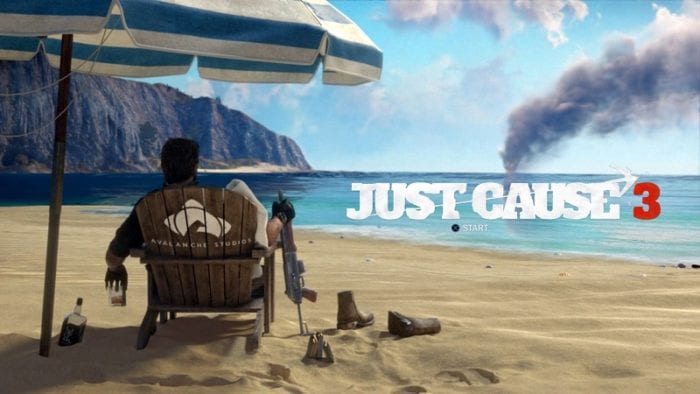 Just Cause 3 is an interesting thing. Here is a game with a story to tell, one about tyranny and injustice in a country far removed from the rest of the world. A country that Rico Rodriguez, the series’ protagonist, calls home. At the same time that this is all going on, there is tons of mayhem that a wayward mercenary can get into. That creates an issue of balance that games have struggled to deal with for a long time. The question is, does Just Cause 3 ever resolve that balance? The answer is, kind of.

As soon as you begin the game, you’re thrust into an exciting mission that involves you standing on top of an airplane while firing rockets at missile placements. Things naturally go south as you’re hurled to the ground where you must break your fall using your slick parachute and grappling hook skills before taking to the ground to ward off military forces. This is how players are introduced to the campaign and world of Just Cause 3. No long introductions, no need to explain what’s happening, just get in there and shoot and eventually you’ll figure out why you’re shooting.

Pretty much all of the missions play out this way, too. Rico will make his way to a location, speak to his contact, then wreak some well-organized havoc on the unsuspecting enemy forces found in whatever place you need to get to. There are story bits cast in to keep it all glued together, but it doesn’t ever get in the way of the gameplay. It’s an interesting way of keeping the player in control as much as possible, and the developers did a good job of making the characters entertaining so that when you do have control stripped away, you can get a few laughs.

One major issue, though, is the loading. Just Cause 3 has some seriously long load times every now and then. The fact that it isn’t consistent is what makes it even more frustrating. You may trigger a mission and be subjected to a 30 second load time, only to restart that same mission and have to wait five minutes for it to load up. This occurs when you trigger a challenge, die, and fast travel. At times, it seemed as if the game froze for minutes on end and led to me dreading load screens.

You’ll be staring at these a lot.

Luckily, when loading does eventually come to an end you’re greeted by some of the most unadulterated fun gameplay released this year. Just Cause 3 is a third-person action game that does its best to let players do anything their hearts desire, as long as that anything has to do with explosive chaos. Destruction is not something that should be limited. There is no one way to destroy a vehicle, and the same holds true for buildings and other tall things. That’s where Just Cause 3’s method of fun comes in. The game tells you what to do in certain instances, but it doesn’t force your hand.

Causing a myriad of explosions, pulling off impossible vehicular feats, and tethering literally everything together (if you haven’t used a cow to knock out a soldier, you just haven’t lived) is unquestionable fun. Figuring out creative ways to go about breaking down a military encampment that could simply be taken out with a rocket launcher allows the player to put their own touch on the adventure. Want to use varying weapons? Go right ahead. Want to go through it all using nothing but your grappling hook and your fists? Suit yourself. It’s the moments where anything can happen (usually with explosive results) that make Just Cause 3 what it is, and that’s just a game where things explode in magnificent ways.

In fact, saying that it’s just destructive doesn’t really do the game any justice. You go places, you blow them up, you enjoy the feeling, then you rinse and repeat. It’s very repetitive by its nature, but that repetition is a testament to how fun seeing things erupt into flames is. You do the same thing a lot, yes, but it manages to never get old. Every base, guard post, town, and facility is just another opportunity to leave your mark on the world however you see fit, even if you choose to do so the exact same way every single time.

All your actions are recorded, as well, thanks to leaderboards that rank nearly every single thing you do. Slingshot an enemy, kill soldiers from a helicopter, pop a wheelie, glide with your wingsuit? Just Cause 3 will tell you how far the soldier flew, how many soldiers suffered due to your chopper, the distance of your best wheelie, and how long you stood in the air. Everything is a competition with friends and strangers and that adds to the excitement of the single player only game without having anyone get in the way of your mayhem spree. Of course, the leaderboards do bring Just Cause 3’s second issue to the forefront.

When you power up the game, it will log you into Square Enix’s servers. No big deal, right? Unfortunately, you’ll constantly be disconnected from these servers which pauses your game as it tries to log back in. At this point if things aren’t working out you will have the option to retry or play in offline mode. The thing about offline mode is that it will once again lock your game up to try and sign in if you go to use your map, pause the game, or if enough time has passed. The only way to counteract the constant bombardment of log-in attempts is to disconnect your console from the internet, but that means losing access to everything else that requires the internet such as party chat, messages, invites, and music services. I’m not entirely sure why Offline Mode isn’t exactly that, but it became more than a slight nuisance during my many hours of play time. To have your game constantly interrupted, especially one that is so damn fun, is not something easily ignored.

Moving around the world is just as fun as messing it up. A whole slew of land, sea, and air vehicles roam around waiting to be commandeered as you provide them a more exciting experience. When there are no vehicles around, though, is when getting from place to place becomes really exciting. Use that grappling hook to get some air speed then launch into your wingsuit to glide through the city looking like a total badass. Swoop low between traffic, skim the top of trees, smack into the side of a mountain… well, maybe not that last part. It connects you more to the world as you move in and around it, and it’s very well done, making the country of Medici a place you actually want to explore.

Tying all of this together are the beautiful visuals that stand in perfect contrast against the ugliness of corruption and the ash of flames. Just Cause 3 takes place in a fictional Mediterranean country and, just like you probably imagined, it is gorgeous. Take a chopper up into the air and you can peer out over glorious vistas, dive into the clear blue water, climb up snowy mountains, and just sit in flower fields if that’s to your liking. It looks just like a paradise you’d expect to have some seedy practices, and it’s difficult not to become entranced by your surroundings. Just Cause 3 is a great game plagued by two issues that constantly rear their ugly heads to break up the fun. The unbearable load times and incessant login attempts can often times sap the energy right out of the excitement. Luckily, just a few seconds with the game can bring the life right back for those willing to deal with the constant frustration.