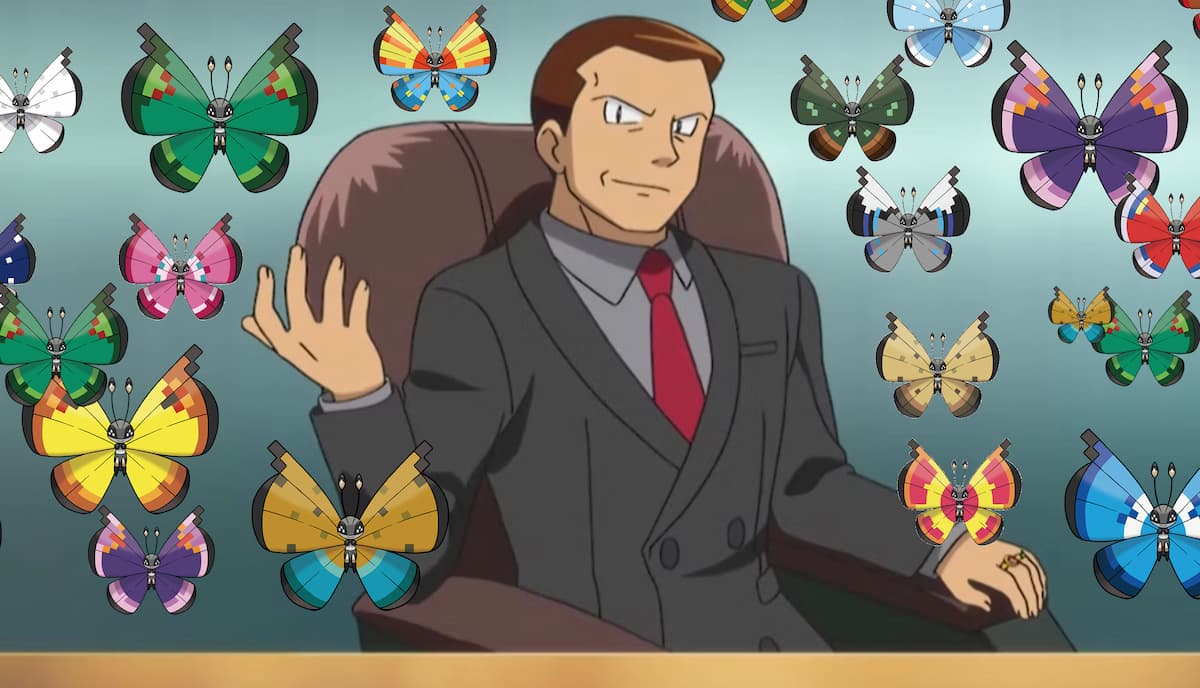 Image Source: OLM and The Pokemon Company via Bulbapedia

Some time ago, my journey as a Pokemon master took a curious turn down a rather shady path. Having missed the distribution period for the mythical mandrill Zarude, I resolved to seek out a second-hand dealer on the Internet in order to add it to my collection. Long story short, the transaction went off without a hitch, I received my product, my Pokedex would maintain its completed status for at least another generation.

I named my Zarude Klaus, and he now works part-time at a discotheque. Very pleased with my hairy son.

One thing that I began to ponder, however, was whether I too could leverage my Pokemon collecting abilities for personal gain. I’ve been doing this for quite some time, after all, wielding creatures whose origins date back to the early 2000s. The notion that someone would want my lousy old Sceptile was a long shot, so I instead scoured Pokemon HOME for clues about what qualified as hot property on the trading scene.

It hit me pretty quick, that the most popular monsters are the ones that are region-locked. It makes perfect sense, as modern breeding had rendered once elusive beasts commonplace — the days of Lapras being an endangered species were long since past.

Meanwhile, regional Pokemon are at the mercy of your coordinates. Are you currently camping in Cairo? Congratulations! Furfrou’s Kabuki Trim is exclusive to your nation. Strutting the streets of Strasbourg? C’est magnifique, the La Reine Trim answers only to the French.

As I am not presently in either of the above mentioned areas (and spending thousands of dollars for a flight to secure an imaginary dog haircut is not exactly frugal), I looked instead to the other noteworthy Pokemon from generation VI that sported similar mechanics: the humble Vivillon.

For the uninformed, Pokemon X and Y’s Scatterbug would eventually metamorphose into a butterfly upon reaching level 12, with the patterns on its wings dictated by the region setting on your console. Unlike Pokemon GO, which geotags your actual location, the region used on your Nintendo account is something of an honor system. Who is to say that I am not Japanese, and therefore capable of accessing the Dead or Alive Xtreme 3 demo? I might like to also feel such deep shame!

As an Australian, I have access to the River form of Vivillon, which is on the lower spectrum of value. To set forth to a new region, however, would not only jeopardize the data on my 3DS, but require restarting my progress in Pokemon Y. Emotionally attached to the contents as I was, neither was a risk I was willing to take. So instead, I returned to eBay and bought a used 2DS and a copy of Pokemon X.

You’ve got to spend money to make money, baby. My history of online purchases have been somewhat mixed over the years — I once ordered JoJo’s Bizarre Adventure All-Star Battle, and instead received JoJo Siwa Worldwide Party in what I can only assume was a cruel prank — but once the items arrived, I was convinced that I had made the right decision.

The 2DS was covered in crumbs, and Pokemon X had an existing save file with an eclectic smattering of monsters (the best of which being a level 59 Steelix named Chinspector). I took a deep breath, looked over my shoulder to see if Nintendo was watching, and factory reset the handheld.

Unfortunately, I was already met with a hurdle, insomuch the consoles will only allow certain regions to be selected. I assume this has something to do with where said console was manufactured; apparently it also means that Nintendo won’t allow me to ever move to Mexico. I can just picture arriving at the airport in Cancun, finding myself surrounded by the local police force on the specific order of Shigeru Miyamoto.

“A delayed crime is eventually good, but a rushed crime is forever bad,” Mr. Miyamoto would snarl, snapping the 2DS over his knee.

So no, I can’t cheat my way to every Vivillon. No Archipelago Pattern. No Ocean Pattern. No Elegant Pattern, shattering my dream of someday attending Eden College. Germany, however, is fair game. I created my profile, assuming a fresh identity as Merl, from Saxony. Despite very legitimately being a German man who does German things, I don’t speak any German whatsoever. It’s not at all suspicious.

I set off on my new journey in the land of Kalos, partnering up with a Chespin I would name Schmidt. He was to serve as an accomplice, scouring Santalune Forest for precious Scatterbug. More and more, I gathered, feeling as though I had to justify this endeavor by amassing as many as I could. This one was Muller, that one was Lehmann. They were all little more than pawns in my game of sweet schadenfreude.

Once I had my fill, I took to Santalune City in order to defeat Viola. Schmidt was ill-equipped for the task, ironically stonewalled by her Vivillon until he channelled his inner Autobot and elected to Rollout towards victory. A quick discussion with Viola’s sister Alexa would net me the Experience Share item — I’ve got the whole damn family doing my bidding — and at last, I could grind my larva army to level 12 to yield a bounty of glorious Continental Pattern Vivillon.

I managed to gather two dozen in total. The process actually took six hours. It was a really pathetic way to spend my Saturday afternoon, but I would have the last laugh when this all paid off. For now, it was time to shed my German doppelgänger and repeat the process. I uploaded my contraband Pokemon to Pokemon Bank (which cost more money to renew despite the fact that it will become a free service in March) and wiped the 2DS.

Now I was Barkley, from County Galway, Ireland. My drink of choice was Guinness, my favorite poet was Oscar Wilde. And indeed, I was feeling the luck of the Irish. More hours, more Scatterbugs, more grinding, more I said! I would not rest until the verdant Garden Pattern was in my greedy clutches.

Melvin from Iceland. Gershwin from Catalonia. Bazza from Australia’s Northern Territory. Again and again, they would invade the unsuspecting depths of the forest, smuggling as many insectoid treasures as their arms could carry. The operation became repetitive to the point of exhaustion, yet all it would take was the spectrum of colorful Vivillon dancing before my eyes to reaffirm my goal.

After about a month of this, I figured it was at long last time to reap the rewards. I had cycled through so many nom de plumes, I could scarcely remember my own name anymore. It mattered not, because whoever I had become, my final form was surrounded by those sweet, sweet butterflies.

With a smug sense of satisfaction, I uploaded the first three Vivillon to the GTS to test the market. Those Furfrou I had been looking at earlier ought to prove a suitable litmus test; would there be an Egyptian dog owner who would be enticed by my German bugs? I went in hard, requesting the La Reine Trim, Kabuki Trim, and Heart Trim, the latter only being available during a Valentine’s Day event.

A day would pass. Then another. Each time I went to check whether a buyer had taken the bait, I was met only with the dead-eyed stare of my ill-gotten Vivillon. Worldly though they may be, they now sat in limbo, dormant and unyielding as prospective traders turned up their noses in apathy.

I must confess, the lack of immediate gratification was concerning, so I elected to take a healthy constitutional around the block (to my nearest liquor store). While en route, I absentmindedly pulled out my phone to send some gifts out on Pokemon GO. Perhaps receiving some nice items would calm my frayed nerves.

After I traded presents back and forth to my friends abroad, however, something most shocking occurred. I was awarded the High Plains medal, as part of some strange process known as the Vivillon Collector. Within moments, a Pokemon spawned before my very eyes, and its mere visage was enough to chill me to the core. It was a Scatterbug, plain as day, looking no different from the ones I had been gathering on the 2DS for so many hours.

Yes, it would seem as though at some point during my stationary globe-hopping chicanery, Vivillon was made available in Pokemon GO. Regional variants that had once required acquisition in their relevant biomes were now only as difficult to find as it was to convince a random player from that location to exchange in-game gifts with you.

My scheme was foiled. My Vivillon were useless. My disappointment was immeasurable, and my day was ruined. In the end, I invested almost $200 in my short-sighted mission to fool the world, and yet, the lesson I learnt was absolutely invaluable. That lesson, incidentally, was that I am an absolute idiot and I deserve all of the judgment. Even if Pokemon GO hadn’t pipped me to the post, why had it never occurred to me that others have probably already been pulling this trick for years? I have no actual excuses whatsoever.

Beau Taplin once opined that, “perhaps the butterfly is proof that you can go through a great deal of darkness and still become something beautiful.” Whether something beautiful does indeed lay before me after these weeks of torturous, fruitless burden, we will have to wait and see.