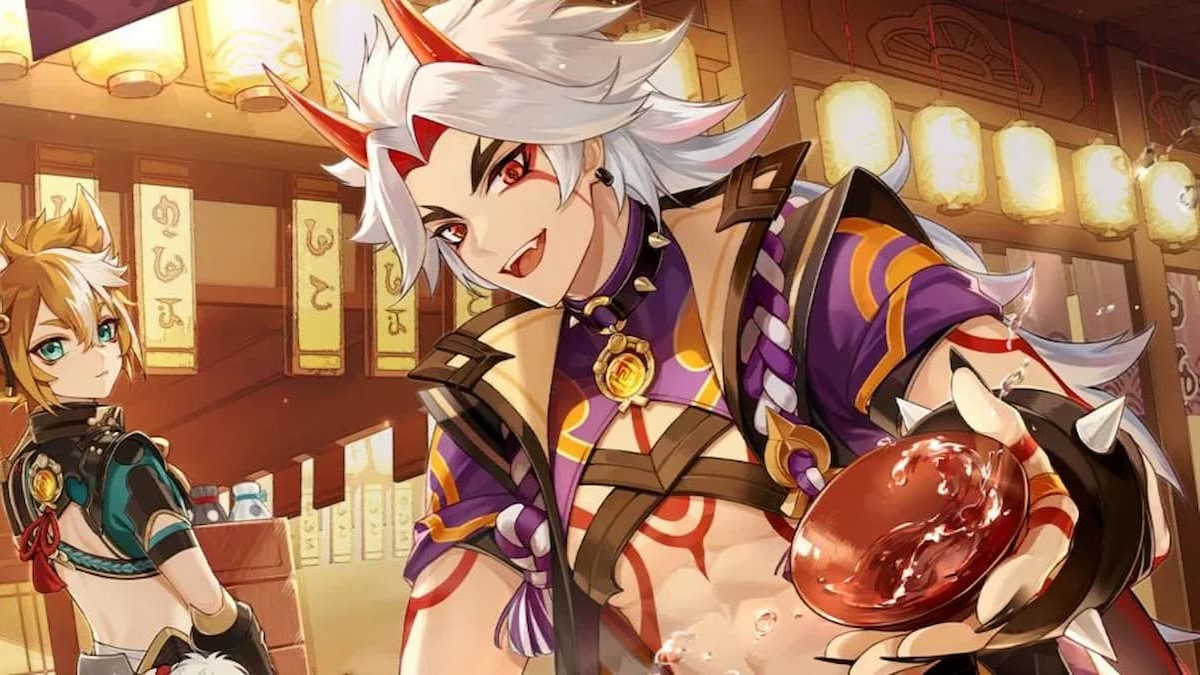 The Akitsu Kimodameshi event of Genshin Impact provides players with a unique set of fun challenges that differs from the standard battles of the game. However, as you progress further, you’ll encounter three powerful bosses known as the “Shatterdark,” who will try to eliminate you in timed rounds. Here’s everything you need to know about how to beat all Shatterdark bosses in Genshin Impact’s Akitsu Kimodameshi.

The Shatterdark boss challenges can be unlocked when players complete the Men-Mayhem minigame in Akitsu Kimodameshi. Once you finish this mission in Genshin Impact, a doorway to these opponents will appear, where you can battle against the Gibbering Grumbler, the Deranged Decrepit Duelist, and the Mesmeric Marine Maiden:

These trials are similar to the game of Pong, featuring a Skill-Ball and a bar that four members of your party can use to attack. As a result, players can earn various rewards in these challenges, such as Mora, Courage Test Tickets, Primogems, Hero’s Wit, and Mystic Enhancement Ore.

How to Defeat the Gibbering Grumbler in Genshin Impact

The first Shatterdark boss, the Gibbering Grumbler, includes a 10-minute timed challenge with a limited amount of 10 Reserve Balls. Therefore, players must preserve and angle their Skill-Balls in the right direction to take down the opponent’s Electrobrick-infused defenses. You can also combine two different elements to enhance the ball’s powers. For example, Travelers can use an Electro and Pyro user to trigger an explosion from a Detonatorball.

When selecting a team, it’s recommended to place a Pyro character in your party since this element counters Electro-types. In addition, you can equip three Modifiers to use during the fight, including Relative Expansion, Switch-celeration, or Concomitant Impact.

Relative Expansion widens the bar for a limited time after a character switch, while Switch-celeration boosts Movement speed by 20 percent. Lastly, the Concomitant Impact shoots out eight fireworks when there are less than 10 bricks on the board, which can help quicken the pace at the ending stage.

Fortunately, the Gibbering Grumbler is a relatively easy boss of Genshin Impact since there will be gaps in its defenses, allowing you to attack while the creature is in a vulnerable state:

It should be noted that this Shatterdark boss will consistently change the layout of blocks on the board, so players must get rid of these blockages to strike the opponent down. Those who complete the challenge will earn 60 Primogems, 200 Courage Test Tickets, and 30,000 Mora (these will be the same rewards for the Deranged Decrepit Duelist and the Mesmeric Marine Maiden.) Furthermore, you can claim other items for achieving specific tasks, like reaching a 3,000-point score.

How to Defeat the Deranged Decrepit Duelist in Genshin Impact

The second Shatterdark boss, the Deranged Decrepit Duelist, requires players to first complete the Ice in the Miso minigame in the Leisurely Pastime. Keep in mind that you also need to progress further in the Test of Courage because these missions can unlock more trials in the Akitsu Yuugei.

Players can equip Hydro, Cryo, Pyro, and Electro users in their party to counter against the elemental bricks during this 10-minute timed battle. While facing this foe, you’ll need to watch out for its sword and lightning-fast reactions due to its ability to send Skill-Balls back in your direction at a fast rate. Therefore, it’s a good idea to keep your eye on the ball as much as possible while simultaneously triggering Elemental Reactions with different users.

If you want to beat the Deranged Decrepit Duelist quickly, you can get rid of blocks to trigger the flurry of fireworks, which will shoot projectiles in front of your character:

It should be noted that Elemental blocks can be destroyed when players use the opposite type. For instance, you can launch a Cryo, Pyro, or Electro Skill-Ball when there are Hydrobricks on the battlefield.

How to Defeat the Mesmeric Marine Maiden in Genshin Impact

The Mesmeric Marine Maiden is the last Shatterdark boss of Genshin Impact’s Akitsu Kimodameshi, who has a prerequisite quest, the Elemental Jumbo. To beat this adversary, you must equip Hydro, Pyro, Electro, and Cryo users in your party to eliminate Elemental bricks before the 10-minute timer runs out.

Since this is the last boss of the Akitsu Kimodameshi, this showdown is relatively challenging because this creature has a reflection skill that can summon watery mirrors onto the field. In particular, when a Skill-Ball hits these objects, it will randomly spawn into another mirror. On top of that, the Mesmeric Maine Maiden will automatically protect itself with bricks once it takes a considerable amount of damage.

Luckily, players can use the mirrors to their advantage since these objects can produce more Skill-Balls onto the platform (shoot the projectile into the mirror):

The only downside to this method is that Skill-Balls will now have accelerated movement, so ensure you have enough Reserve Balls to survive this showdown.

That does it for our guide on how to beat all Shatterdark bosses in Akitsu Kimodameshi. For more Genshin Impact Version 3.3 content, be sure to explore the relevant links below, including our guides about how to unlock Faruzan, where to get Henna Berry, and the top 10 best Character cards in Genius Invokation.