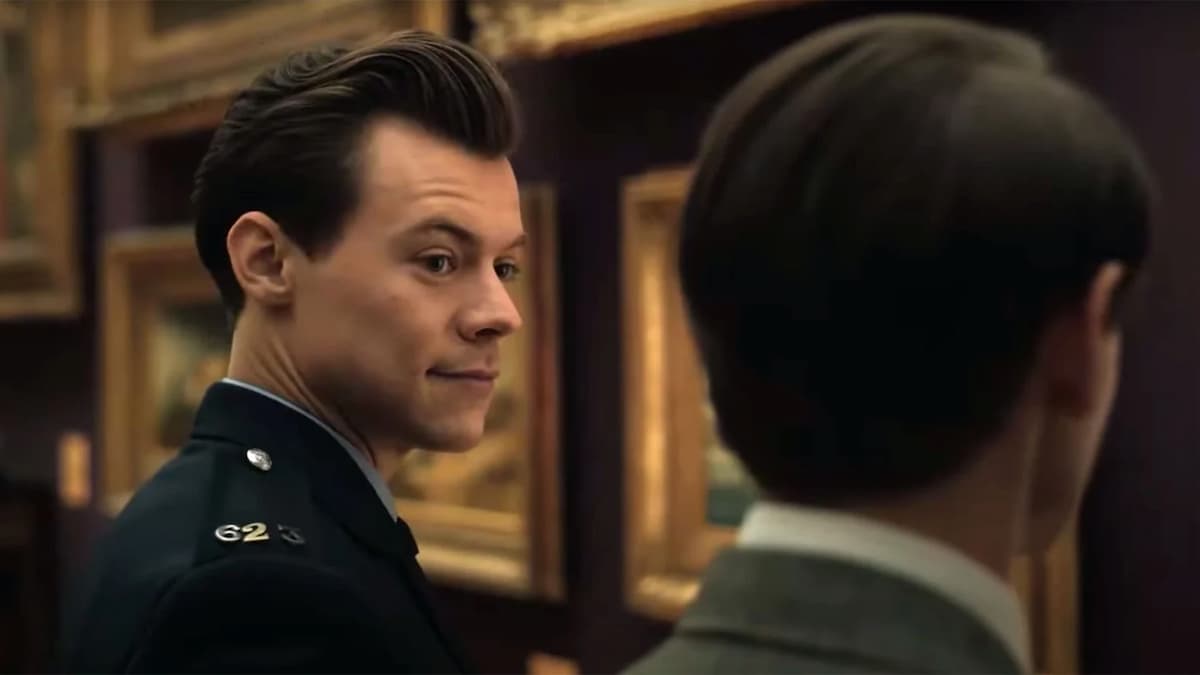 Harry Styles managed to break into Hollywood and land some very huge roles between his tenure in One Direction and building his own solo music career. Styles has been in the MCU and collaborated with Christopher Nolan, when he’s not touring the world as a popstar, which is an impressive start for a musician turned actor.

This year alone, Styles added two more features to his filmography: the dramas Don’t Worry Darling and My Policeman. Here’s our attempt at ranking all of Harry Styles’ films. And spoiler alert – number one is no shocker.

Eternals is considered among one of MCU’s weakest films. It’s guilty of some awful CGI, an overloaded cast, and a meandering plot. On top of its many flaws, to add one more, Styles makes an out-of-place cameo in the film’s post credit scene.

Styles, who plays MCU character Eros, AKA Starfox, is the brother of supervillain Thanos. Given that Brolin’s supervillain shoes are nearly impossible to fill, especially for a newcomer, it’s difficult to conceive that anyone is looking forward to a Marvel film starring Styles.

Although his scene was brief, Styles lacked the charisma and fun of the light-hearted, womanizing, anti-Thanos character portrayed in Marvel comics. Instead, we get a very wooden performance that feels more scripted than naturally acted. If the viewer doesn’t know who Eros is, they certainly won’t know any more about him after seeing Style in the post credit scene.

When compared to other new characters introduced, Patton Oswalt’s drunk Pip the Troll is far more captivating and funnier. To think that Styles can potentially be used in other MCU properties like She-Hulk (Jennifer Walters notoriously defended Eros), doesn’t only feel like a wasted opportunity for a good actor, but will be a glaring sign that it’ll be a tough watch.

My Policeman tells the story of a 1950s cop (Styles) and his same-sex affair, despite homosexuality being illegal at the time. Although interesting in premise, it catastrophically showcased Styles’ limitations in acting.

The film felt like a Styles’ version of Brokeback Mountain for cops, but nowhere near the level of a Ledger-Gyllenhaal powerhouse performance. It’s a bold acting choice for the musician, but a bit ambitious for the newcomer.

Styles continues to show limitations in his craft, by being completely tone deaf (no musical pun intended). At times he was too over the top with Emma Corrin, and almost lifeless with David Dawson. Because of his lack of consistency, it only goes to show that he has so much more to learn in showbiz.

Yet as we move onto the best performances of his acting career, what’s apparent is the popstar’s need for the right role with the right director. Veterans like Christopher Nolan can definitely shape his career, and not just plop him into award-snatching or celebrity-bloated franchise roles.

Styles’ lackluster performance has been labelled as rigid, inexperienced, and “criminally bad.” What could have been a turnover opportunity into Hollywood stardom, instead, was a backfired miscast in a dull procedural drama, gambling Styles’ acting career altogether.

Don’t Worry Darling received mostly unfavorable first reviews at the Venice Film Festival, and the controversy surrounding the film’s development didn’t exactly help it get off the ground. However, this movie is rather good with a solid performance by Styles (taken on from Shia LaBeouf, after he was fired for behavior issues on set).

Styles has earned a reputation for unsettling intensity on the screen, and it’s easy to see how his performance, whether through a look or facial expression, holds the film together by a nerve-wracking thread. His performance is subtle and sets a mysterious uneasiness, akin to Daniel Kaluuya in Get Out.  Though Styles takes a different approach to Jack’s intentions, he brings to the character the necessary blankness that fits the narrative nicely.

He’s not asked to do much in this film, but each plot turn hinges on him, and he does a good job of hitting that landing. The film tackles many somber and mysterious themes up until its big plot twist. Yet as the film twists and turns, Styles does an admiral job in keeping up with actor heavyweights Florence Pugh, Chris Pine, and Olivia Wilde.

Whereas Dunkirk shows Styles can blend into a big production very well, Don’t Worry Darling is the opposite side of that coin. He demonstrates that he does have the ability to contribute to an ensemble and hold his ground. And with that, there is much promise to his acting career.

When renowned director Christopher Nolan disclosed that he had cast popstar Harry Styles in an epic war film despite Styles’ lack of acting experience, eyebrows were undoubtedly raised. On such a delicate film subject, the prominence of Styles’ celebrity was a major cause for concern.

Styles, however, delivers a powerful, compelling performance. So much so that the audience can completely invest in the musician’s journey as a character because of how well he blends into the war epic. Instead of using his boyish good looks as a crutch, he uses his expressions as a showcase for terror and dread on the battlefield.

At the time, critics marveled at Styles’ ability to take part of the ensemble without drawing too much attention to himself. Rolling Stones praised Styles on “playing a small role with subtle grace and zero popstar showboating,” while NPR humorously elicited that Styles “doesn’t stand out in the part except for being a little handsomer than anyone else.”

Based on a true story, Dunkirk is an incredibly well-made film that excels in every aspect of technology while masterfully depicting a crucial period in human history. The film demonstrates that Styles does have the chops to excel in his acting career, unlike other film projects he has associated himself with.

It just goes to show that when placed in proper hands of an auteur director who values the whole film instead of the individual, growing actors like Styles can be used optimally and show promise for years to come

When all is debated on whether Styles is a good or bad actor, his acting career does not appear to be coming to an end anytime soon. As Eros, he is still establishing himself in the Marvel Cinematic Universe. He is also said to be in talks to join a Christopher Nolan production, though not the upcoming Oppenheimer.

With some juicy parts on his plate, there is still a good chance of a reputable acting career in the popstar’s future. If there is, one can only desire that he learns from his ensembled performances (like Dunkirk and Don’t Worry Darling) rather than being a sore thumb attempting to boost his brand (like in Eternals and My Policeman).