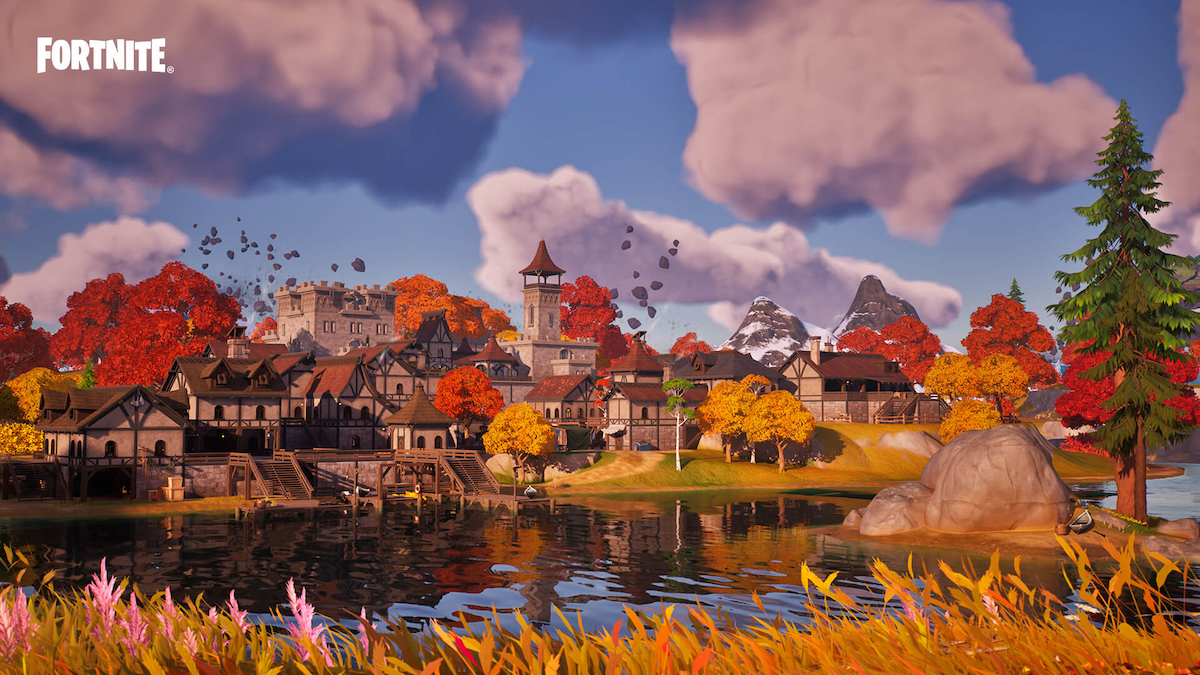 A new chapter has come to Fortnite, meaning an all-new map to learn. Considering the mad scramble there will likely be to figure out the best parts of the map, we figured it’s best to give some advanced information. Here are all new named locations & points of interest in the Fortnite Chapter 4 Season 1 map.

Despite how the Fracture event seemed to be rejoining old map sections, everything we know about the new map points to a complete lack of returning named locations. You can see exactly what the Fortnite Chapter 4 Season 1 map looks like below, before we dive into the individual named locations.

Instead, we have many awesome new ones, and we’ve got the low-down on them all below.

It’s likely the Citadel’s enormous castle will draw in combatants like honey, similar to Tilted Towers. The tall statues out front serve as great cover, considering their exceptional health.

The kingdom village feel of Anvil Square will no doubt remind players of Greasy Grove. The large collection of houses means a high concentration of loot, so this is one of those battlegrounds to be wary of when landing.

This is referred to as “the headquarters of the Reality Warriors,” which makes the concrete compound aesthetic truly work. If you’re used to fighting somewhere like Shimmering Shrine from last season, this area will feel instantly familiar.

If you’re drawn to looting houses but don’t want to be right next door to an opponent doing the same, Frenzy Fields will likely be your most frequent drop point. There is plenty of open space between structures to try out all of the new loot you have acquires in the area.

If you’re going to be wanting to be closer to the water, Breakwater Bay should be your first choice. This location gives plenty of water to catch fish and stock up on healing items. If you found yourself landing at Sleepy Sound the most, Breakwater Bay is the area for you.

You’ll find Shattered Slabs in an excellent area, halfway between The Citadel and Frenzy Fields. Both areas are sure to draw players, so you can take advantage of that and pick this quarry. The cavern areas provide good cover and can be walled off if you feel like building some defenses.

Considering Faulty Splits is made up of two separate themes, both modern and medieval, players have their choice of buildings to loot. However, as the medieval side has the high ground, it is the better choice when picking where to start.

Seeing as Breakwater Bay is absolutely full of players diverting from the massive cluster going to The Citadel, Slappy Shores is a great alternative. It’s far enough away from any other major named location and has this factory stocked with chests. If you’re looking to gain ground by having good loot, it’s the right pick.

Nestled in the same snowy mountain biome as Brutal Bastion, Lonely Labs has one great thing going for it: being on the edge of the map. Named locations at the extreme edges of the map(s) usually don’t get as much traffic, with a majority of players jumping early to mid of the line. If you’re willing to be patient, Lonely Labs will have the loot you are looking for in the main building.

All POIs in Fortnite Chapter 4 Season 1

There are some great spots on the new map to drop if you don’t want to hit up a named location where all the enemies are, and we’ve found some for you to try out in a future game.

This tower is great because it is close enough to The Citadel to not be in it, but far enough away you won’t immediately have anyone trying to push their way in. Plus, you’re in the Medieval area, so there’s a chance to find an Oathbound chest inside for some extra sweet loot.

Watery Watch sits on the only island found in the southwest corner of the map. For that reason, it’s not likely to see much traffic. If you’d like a solid place to start from to begin making your way inland and collecting loot the whole way, this is it.

Far out of the way from those landing at Faulty Splits or Frenzy Fields, you aren’t likely to have any company, and the tower on the island provides a great lookout point for where to head next.

You’ll find this landmark/island on the extreme western edge of the map. As with Warden’s Watch, it is the perfect distance from The Citadel to gather up some look and then join in the action over there. This location also has a chance for an Oathbound chest to spawn in the dilapidated castle.

If you want to be left alone at the start of a match, it is just about guaranteed that no one else is going to come up here. Fishy Floe is at the extreme northeast of the map and so far from land that you’re safe if you just want to take things slowly.