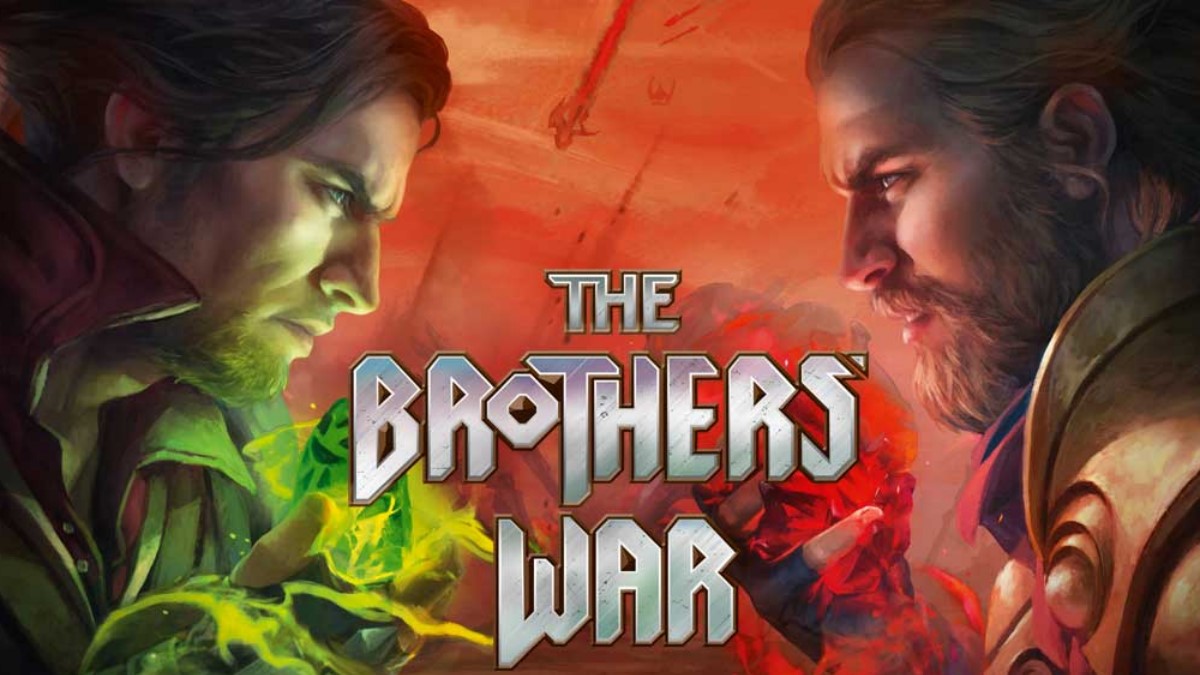 MTG Brothers’ War promised to show us the epic story of Uzra versus Mishra as a saga of an all-out war in the history of Dominaria’s past. If the revealed cards from the set are anything to go by, this set is looking to deliver on that promise. Towering mechanical golems, armies of constructs and even the brothers themselves go to war in this set. Much of this magic set is reminiscent of Ikoria, the Kaiju-themed set of Magic The Gathering’s past. However, this set is reminiscent of mechanized war, specifically drawing from Desielpunk and World War One instead.

In the meantime, we have a lot of very exciting cards to talk about. Many of the cards in this set hit like artillery shells, their explosive impact immediately apparent. Some of these cards seem harmless, but as you read them they have the creeping, subtle power of mustard gas. Many cards are flavorful bullets, which will serve you well in the magazine that is your deck. These 12 are some of those cards and are the most exciting cards from Brothers War.

Being the last entry on a list can suck, but with cards this fun and exciting being 10th isn’t so bad. Urza’s command is one of those cards that seems powerful, if a little obvious, but then as you puzzle it out it has even a little bit more power than you anticipated. If your opponent swings out, you can shrink their team and drop a potentially beefy android down to kill one of their threats. If you need cards it’ll let you scry and draw, giving you a power stone for your troubles.

The question with Urza’s Command is whether or not it’s worth slotting it in over another potentially more useful artifact. The decks that want it are going to want artifacts, so it’s not going to be great in generic control decks, like other blue commands. The question is whether or not the Construct it produces is going to be worth writing off a slot or four in your deck. It will also depend on how powerful powerstones end up being. Are the 7-9 mana behemoths going to be worth ramping into? That remains to be seen. In other formats outside of Standard, this card may also struggle to see play as the other cards that create similar constructs are frankly much more efficient.

This little card might have snuck under a few radars, especially if you only read the first line of text. The 2 life is nice, but I’m not going to dedicate a slot in my deck to a do-nothing 1/1. But this 1 mana artifact creature has a very strong secondary ability, effectively letting you exile an artifact or enchantment for 2 mana, a cost you can split over several turns.

The power of this card is in its efficiency and its easy recursion. We’ve seen 2 mana artifact and enchantment hate, but those cards are usually sorceries or instants. This one you can potentially recur over and over again, as both creatures and artifacts are pretty easy to snag from your graveyard. This card will likely see a sideboard slot in a few standard, explorer and maybe pioneer reanimation decks, but the real all-star home for this little guy is in commander. There recursion is so much easier and more consistent, and the number of problematic artifacts and enchantments make this a very nice addition to any artifact EDH deck.

8. One With The Multiverse

In any other set, this would be among the top 3 when it comes to fun and interesting cards. In this set, this card sits at number 9. Despite that, this is a card well worth chasing after. Free spells from your hand is always very exciting, and this is sure to be a great big mana commander card, but perhaps what works best about this card is the sense of power you feel playing it. It depicts one of the most incredibly electric moments in magic, where Urza is gaining his planeswalker spark, and it feels about as epic and impactful.

One With the Multiverse is a clunky card to fit in most any format. It’s possible in a format with Show and Tell to get away with it, but this may have to be just a commander card. Despite that, it’s an exciting bombshell of a card.

Teferi is one of those cards which could go either way. Either it makes a splash in 60 card constructed or it becomes a bulk mythic. Sometimes those cards are the most exciting, because they change how your view the game of Magic the Gathering. On the one hand, Teferi’s passive ability allows you to gain a lot of counters on him quickly, allowing him to either get control of a game by deploying multiple growing threats or to reset your opponent’s board state.

The question is going to be whether or not he will be strong enough to justify his 5 mana price point, which is on the unwieldy side for Planeswalkers. Can he beat out other 5 or 4 mana Planeswalkers that see play in control decks as well? It’s exciting to consider, as we may see more Planeswalkers like Teferi if he succeeds in making an impact.

This set has plenty of Eldrazi-sized monsters, but Mishra may top them all in terms of sheer impact. Technically a composite of two separate cards, this 9/9 threat already fits well in plenty of historic, pioneer and explorer archetypes. Rakdos midrange and sacrifice decks can both make use of Mishra’s suit of devastating abilities. We already know that Mishra’s meld half is going to be great if you can pull it off, Kroxa and Uro are similarly powerful creatures you have to jump through hoops for, the question is whether or not it’s easy or efficient.

Mishra has an advantage over his brother in that his artifact is cheaper, and can be returned from the graveyard with Unearth. This means you could play Mishra, then unearth the Phyrexian Dragon engine and then the two would meld into Mishra, Lost to Phyrexia when they both attack. Of course, this is vulnerable to disruption at many points. Mishra is definitely powerful enough to take over a game if he sticks. Unlike Urza, who may struggle in 60 card but have a better time in commander, Mishra may have an easier time in 60 card than commander. Mishra doesn’t demand as much out of a deck, while Urza is going to likely have to go in an artifact deck.

Urza is another Merge card, and also one of the other main characters of this set. Urza has a massive, record breaking six abilities as a planeswalker, which makes sense given how anticipated a black bordered Urza planeswalker card would be and also given how powerful Urza is. While the 7 mana cost on Urza’s meld ability may seem like a lot, keep in mind you should be able to activate this ability the turn after you play The Mightstone and Weakstone if you play Urza beforehand, as though it’s mana can’t be spend on nonartifact spells, it can be spent on abilities.

Urza will likely do better in commander than in regular constructed, mostly due to the fact that it’s easier to get up to 6 or 7 mana in commander and the fact that it’d easier to build a commander deck around him rather that fitting him into an archetype. Still, he’s very exciting as this is the first time players will be playing with a meld planeswalker!

Myrel does a lot in a lot of circumstances. In commander she’s another copy of Grand Abolisher who can stop your opponent from interacting on your turn. In older constructed formats she’ll be a solid addition to midrange and aggro. In standard she is perhaps the best hope for the burgeoning Soldier tribal archetype to get off the ground. If Myrel doesn’t do it for the soldier deck, then sadly nothing will.

There’s something beautifully simplistic and yet elegantly brutal about Myrel. On the one hand, she’s a humble token generator that forces your opponent to play Hearthstone without the perks. On the other, she enables you to go off without interaction if you happen to have a combo. She’s going to be absolutely deadly if there is a deck that can use her aggro half and her combo half to equal effectiveness. A soldier deck with some way to kill an opponent extremely rapidly is perhaps too much to ask for, but it would be exciting if soldiers could have their day in the sun.

Tawnos is an excellently flavorful card, with this creature producing artefact copies of birds or beasts you play, simulating the idea of making construct copies of animals very elegantly. This card also is a shoe in as a commander for beast or bird tribal in EDH. These two tribes are somewhat underrepresented, especially in the simic colours, so any support is helpful.

However what’s most exciting about Tawnos is the slightly different design space for Simic. Yes, simic gets a lot of tribal stuff and token copies, but the idea of simic moving into artefacts is a really exciting thought. Hopefully we are getting further from the time when simic’s only identity was either as “+1/+1 counters” or “ludicrously broken”.

The most exciting legendary creature in the set. Gix is a character we’ve seen referenced often but also has never gotten a card. This card really seems to be a boon for mono-black in almost any context you can think of. In regular constructed like Pioneer, Standard and Explorer Gix represents an upgrade to mono black aggro that gets you cards for doing things you were going to do anyway.

In commander, it’s very exciting because it offers a new dimension for Mono Black commanders. Mono black in commander is often about control or ramp, but Gix is a pillowfort-style group hug deck that also encourages swinging at your opponents aggressively if you want to build him like that. Sure he’s a big value engine like a lot of black commanders, but he’s also more deep and complex than that. A more aggro mono-black commander deck may also be a better budget option, as most of the pricier mono-black cards are all about ramping aggressively.

If you’ve been playing magic for a while you may remember Debtors Knell, a 7 mana enchantment which put creatures from any graveyard onto the battlefield under your control. It was a bulk rare because getting it on the battlefield was a hassle, but it was the ultimate realization of the Timmy dream of being able to slam massive creatures onto the battlefield turn after turn from your, or your opponents, graveyard for no cost.

Portal to Phyrexia is the same card, more or less, as a more expensive artifact which forces each opponent to sacrifice three creatures. This time this card may end up being more impressive due to several factors. For one, we have a couple of artifact reanimation spells in standard. For two, it being a colourless artifact means it can be slotted in a whole bunch of decks. For three, it comes with an ability that can wipe some opponents boards. Even if it doesn’t end up as a constructed all star it should be in almost any commander deck that can cast or reanimate it.

And that does it for our picks for the 10 most exciting cards from MTG Brothers’ War. Be sure to search for Twinfinite for more tips and information on MTG.