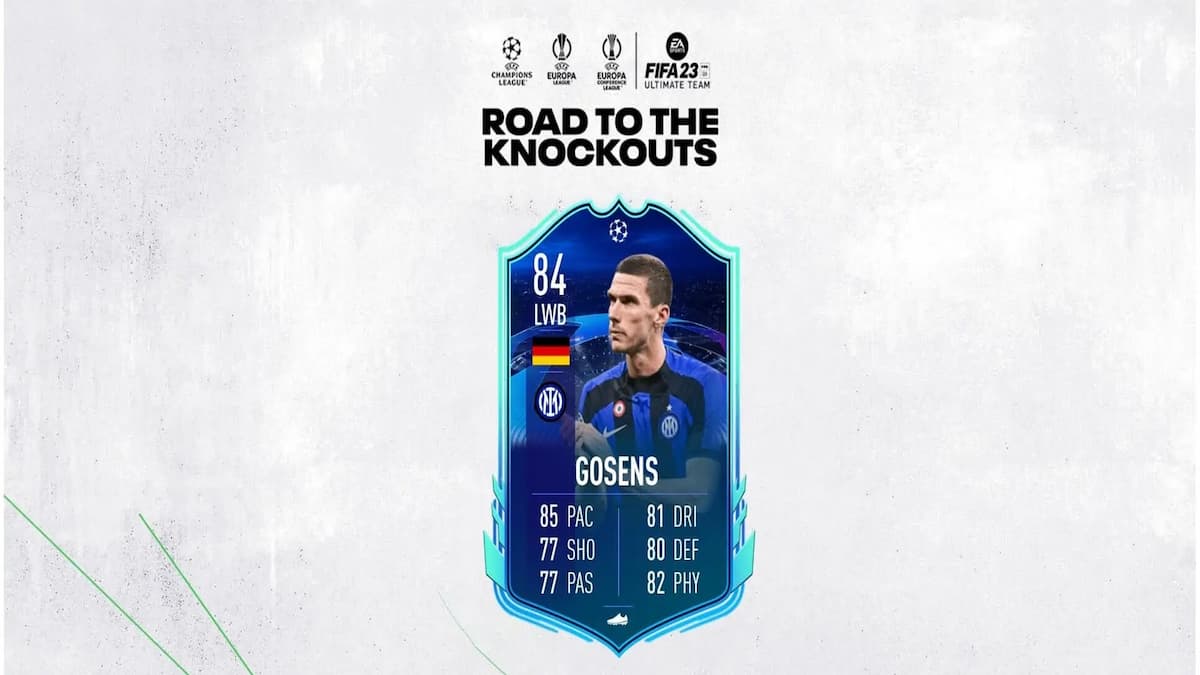 Ultimate Team can be exhaustive, as players can hardly rest particularly when it comes to card promotions. Road to the Knockouts is the latest to launch in packs, through SBCs, and even season-based objectives. So today, we’re going to break down how to unlock Road to the Knockouts Gosens in FIFA 23.

Typically, players have to test their luck through packs or put a good amount of coins into an SBC in order to unlock specialty cards like Gosens. Yet, every once in a while they’re given a chance to do so through a very specific set of objectives, which brings us to Gosens.

What follows is not only how to find these objectives, but also the four separate steps you’ll need to accomplish for Gosens to be yours once you do.

It takes a little bit of menu hopping to access, but it’s fairly straightforward. Simply go from Home > Objectives > Objectives > Road to the Knockouts: Gosens and you’re there. Then, you’ll need to check off four different tasks, which can be done in any order.

All players need to do here is assist 5 goals using Through Balls in Squad Battles (or Rivals) matches on Semi-Pro difficulty or higher. The through ball pass works as follows:

Another simple one, players must score 7 goals using Germans in Squad Battles (or Rivals) matches on Semi-Pro difficulty or higher. This is simple enough to knock out over a couple of matches, but as you’ll see below it may be wise to double up on objectives.

This is where players should consider combining their German and Serie A-based objectives. Players must score and assist using Serie A players in 3 separate Squad Battles (or Rivals) matches on Semi-Pro difficulty or higher.

Our suggestion? Throw a couple of Serie A midfielders out there alongside some German wingers as well as an Italian striker. That way, all your scoring bases should be covered.

It’s also important to note that you do not have to score and assist with the same Serie A player in the same match to successfully complete this objective. Players can score with one Serie A representative and assist with another.

However, both must be done within the same match for it to count towards the objective.

This may feel like the most complicated of them all, but that is far from the case. Players must win 6 Squad Battles (or Rivals) matches on Semi-Pro difficulty or higher while having a minimum of 3 Serie A players and 3 Germans in their starting lineup.

Once again, it’s important to note that you don’t have to keep that same combination in your lineup for the duration of the match. You only have to start the match this way. Additionally, knocking these out on either Semi-Pro or Professional should take you virtually no time at all.

And that’s all players need to know in order to unlock Road to the Knockouts Gosens in FIFA 23. If you’re looking for more tips on the game, Twinfinite has plenty to offer including guides such as how to score downward headers and how to complete The Challenger SBC—as well as endless information at the links below.