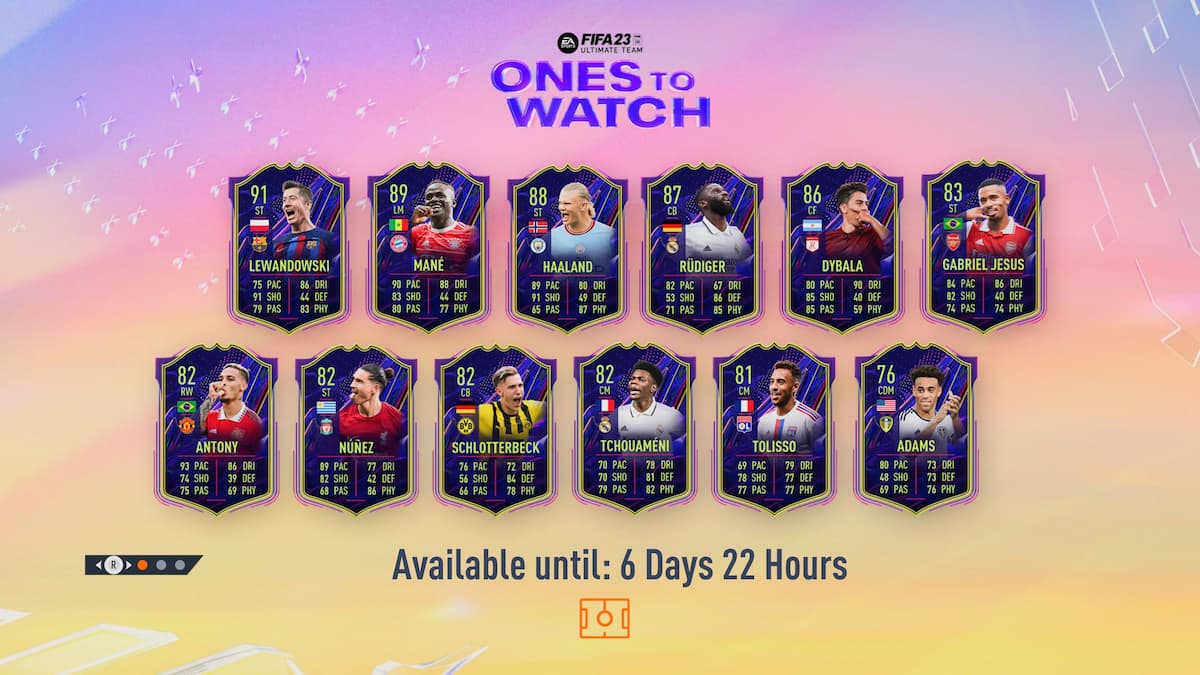 FIFA 23 is upon us, and with it, another step into the Ultimate Team saddle awaits. While there are many ways for players to earn rewards throughout their FUT journey, and countless card promotions along the way, Ones to Watch is a particularly exciting entry into the FUT-verse. In this guide, we’re going to break down how to get Ones to Watch players in FIFA 23 and which OTW player cards are available.

Several players will be up for grabs starting Friday, Sep. 30. Before getting too overwhelmed, though, it’s important to know what makes these Ones to Watch players so special.

What Are OTW Cards in FIFA 23?

Ones to Watch players in FIFA 23 are those who made a notable move over the summer transfer window—Erling Haaland leaving Borussia Dortmund for Manchester City, for instance. These player cards are eligible for upgrades throughout the 2022-23 domestic season based on their own performance as well as their club’s.

EA has also introduced a “Wins to Watch” mechanic this season that tracks a player’s club’s domestic progress (or perhaps lack thereof). If these specific players win three of eight league games starting from launch day, they’re eligible for an upgrade.

Not only that, but with the 2022 World Cup around the corner, EA has also introduced a “Nations to Watch” mechanic based on their performance in Qatar. If their nation wins any game at the World Cup, they’ll be eligible for an upgrade. Notably, the OTW players do not need to be involved to receive an upgrade.

For now, there are five official Ones to Watch player cards in FIFA 23 that have been confirmed. The bold indicates which cards are now available in-game:

How to Get OTW Cards in FIFA 23

There are multiple ways for players to earn or get OTW cards in FIFA 23. Outside of grinding and spending big, that is. Those ways include:

Be sure to check the SBC page often for updates regarding Ones to Watch players. Of course, plenty of luck is involved when it comes to packing one of these players. Still, there are a couple of other ways for you to get your hands on one. Though, the usefulness of these players will likely vary.

For now, this is everything you need to know with regards to Ones to Watch player cards in FIFA 23 and how to get them. Be sure to check back with Twinfinite for some of our other guides such as a breakdown of the Bronze Pack Method and all Arsenal player ratings—as well as endless information at the links below. And as always, good luck!