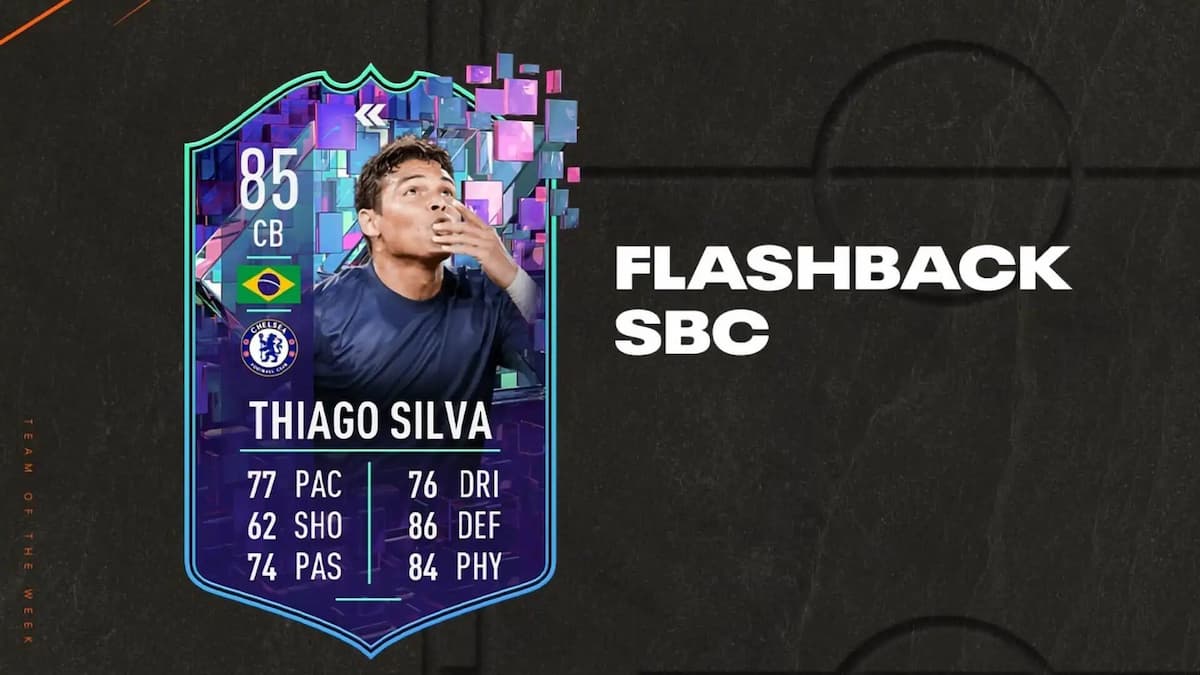 FIFA 23 is hardly a week old, but the Ultimate Team card promotions will not be stopped. Ones to Watch (OTW) are here; Team of the Week (TOTW) is in full swing; we’ve got SBCs galore. And for the foreseeable future, players can just keep adding them to the list. So in this guide, we’re going to walk you through how to complete the Thiago Silva Flashback SBC in FIFA 23.

Not too dissimilar from our Franck Kessié OTW SBC, completing the Thiago Silva Flashback SBC in FIFA 23 is not going to be cheap. Players will need to put together three different squads in order to claim the ultimate reward, much like they did with Kessié. And as always, whether or not Silva’s worth the price will be up to you.

Here’s a breakdown of what you’ll need in order to complete each task, as well as your pack reward for doing so.

For what it’s worth, a Rare Gold Pack for an 86-rated squad feels a tad insulting. Still, a Silva card with that Pace boost as a dependable central defender could be intriguing enough to go for.

We’re going to start things off with this disclaimer: This is operating under the assumption that you do not currently have any of these cards. However, there is a pretty good chance that you’ll have packed or purchased some of the ones that will be displayed.

Or, you might even have some highly-rated cards not shown here that you would rather use instead—and to that we say, go for it! Either way, the nicest thing about these tasks is that once again, they do not contain a chemistry requirement.

Here’s what we ended up with:

So after using the Brazilian Fernando (CDM, Sevilla), I first decided to fill out the rest of the squad with the highest-rated common gold cards just to see how close we’d get to that 84-overall threshold. The answer was 82, so we decided to tinker at the following positions first: GK, CB, and LM.

Rare GK cards can run fairly cheaply, and the 84-overall combination of Chiellini and CB and Insigne at LM continues to work wonders. But if you want some variety at CB, Hummels, Bastoni, and Bonucci will run you roughly the same price —2,300 coins—and each of them are at an 84 overall.

Inevitably, we had to go full-on rare gold to fill out the squad appropriately. Instead of Insigne at LM, you could also try Angeliño (Hoffenheim) for just 900 coins—the trade off being that he comes in one tick lower at 83 overall—so we decided to slot him in at LB instead.

As of this writing, none of these cards should run you more than 2,300 coins. Individually, that doesn’t seem too bad. Of course, these things add up—and quickly. All in all, not too bad.

That said, brace yourself for what follows.

Disclaimer: Do keep in mind that this SBC will be running for a little over a week still. Therefore, it is reasonable to assume that prices will fluctuate. If you’re looking to keep a close eye on the virtual market, FUTbin is the place to go.

We were able to get away with two 83-overall players in the previous build, so let’s say we try that in this one—just with 84-overall players instead. We’ll start with Trippier (2,200 coins) at RB, which also knocks out the PL player requirement.

As for our second 84-overall recruit, let’s toss Mertens (2,200 coins) back up top in one of the two striker spots. From here on out, expect things to ramp up considerably. Here’s where we ended up. Keep in mind that again, there is no chemistry requirement. Therefore, you can throw players anywhere:

Like we warned, it’s getting pricey. If you’re still game for Silva, though, you’re going to have to steel yourself for what awaits.

Now last, but certainly not least, we’ve come to our 86-Rated Squad. For this, we’ll use the same trick as we did for the previous build: Use your least expensive 85-overall players and plug the remaining gaps with 86-overall cards.

Quite the price range, right?

One major thing to keep in mind aside from the lack of chemistry requirement is that there is no league or nation requirement for this one either. Players can go anywhere; players can be from anywhere. So, place them where you may.

And if you’ve already packed some untradeable yet highly-rated fodder, feel free to use them to make this build a little simpler. For our carryovers, we’re going to stick Aspas (7,000 coins) up top this time and keep Busquets (7,000 coins) central. From there, here’s what we ended up with:

Imagine for a second, if you will, trading in an 86-overall squad—as well as two other additional squads—for an 85-overall player card. Is he worth it? We suppose there’s only one way to find out.

For the time being, this is all you need to know in order to complete the Thiago Silva Flashback SBC in FIFA 23. Decisions await!

And before you go, do be sure to check out our other FIFA 23-related content such as how to complete the Elite Eight SBC and an explainer on the Bronze Pack Method—as well as endless information at the links below.