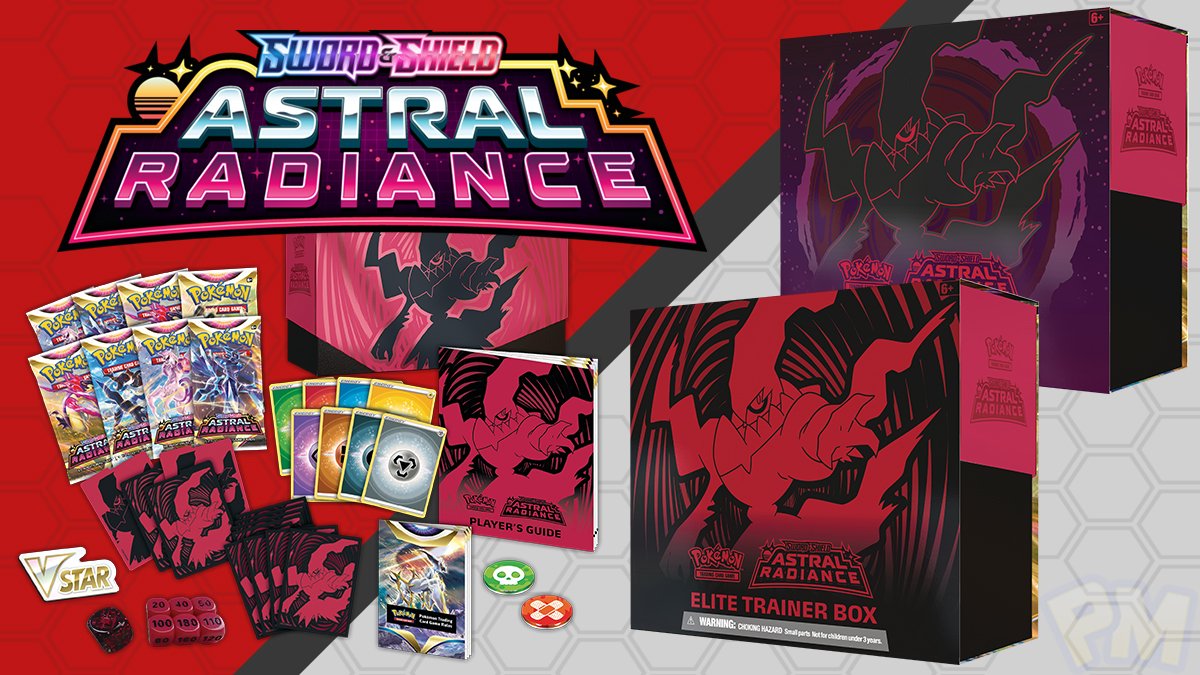 Pokémon TCG’s Astral Radiance set brings a bunch of powerful cards that shift the field for players ready to get down and battle it out with their favorite decks, so we’ve put together a list of the Best Cards to Pull from Pokemon TCG Sword and Shield: Astral Radiance.

While you’re opening your packs of cards, or sorting through your collection, you’ll also want to watch the new Pokemon anime and the commercial of the Pokemon Legends: Arceus video game.

For collectors, this Starmie V Trainer Gallery is as beautiful as it gets for the card art in this set. You are treated to a relaxed scene by the pool with Starmie and one of the most beloved characters from Pokémon’s history, Misty. If you’re a fan of Starmie and plan on using it in your deck, then this card is a total win-win!

One of the major themes of the Astral Radiance set is the prevalence of darkness Pokémon, and Hisuian Samurott is one of the most powerful to make their appearance. The hues of blue color and added red blend nicely with the gold version of this card and are sure to look great in any collector’s binder.

Miltank is not a difficult card to get, but you should be happy if you pull this guy because Miltank is a cute Pokémon that is also very playable thanks to his unique effect, Miracle Body, which prevents all damage by VSTAR attacks. This little guy stares down the most powerful Pokémon of this set and takes zero damage from them, but can also start to become a threat of his own as your opponent starts building up their bench.

Furthering the power of Dark-type Pokémon in this set, Darkrai VSTAR is a force to be reckoned with. As one of the newer mechanics introduced to the TCG, Darkrai’s VSTAR power, Star Abyss, lets you bring back up to 2 items from your discard pile back into your hand. Recursion abilities like this are always great in any TCG and add the fact that this guy has a mean and edgy look, makes it a great pull for players and collectors who want to add some spice to their binders.

As the leader of the Pearl Clan in Pokémon Legends: Arceus, she’s bound to have her share fair of fans, and she’s one of the main characters in the storyline that revolves around the two most powerful Pokémon in this set; Palkia and Dialga. With an important role to play in the lore of the franchise along with cool character art, collectors will want to get their hands on this card ASAP. From the TCG gameplay standpoint, she’s no slouch either; when you play her as your supporter for the turn, you’ll be able to search your deck for a fire Pokémon and an item card.

This Radiant Greninja is a force to be reckoned with, due to its powerful Concealed Cards ability that lets you draw 2 cards, and a Moonlight Shuriken attack that hits 2 of your opponent’s characters. A tried and true fan-favorite, Greninja is always popular when making an appearance, and this card also capitalizes on the new Radiant type of card that’s designed to be a rare and powerful version of a Pokémon with a catch: you can only have one in your deck.

This gold secret is a rare pull that will be a great addition to your collection with its epic location artwork and in-game ability that make things extremely frustrating for your opponent. In the Pokémon Legends: Arceus video game, this is an important location towards the end of the final arc, which makes this a significant card for collectors.

Playing this card in the TCG spells trouble for your opponent since they won’t be able to use any special energy effects, which is most of the competitive decks in the field being played. When getting your Astral Radiance cards, make sure to get yourself a copy of the Temple of Sinnoh.

One of the main legendary Pokémon from this set and story arc, Origin Forme Palkia V is definitely a winner you’ll want to pull or have in your collection. The artwork on this variant chase card is full of artistic flair and thematic imagery that showcases what Palkia’s Spatial World must be like. For fans of the water element, this is a strong character to build your deck around and you’ll be able to search your deck for any stadium thanks to Palkia’s Rule the Region effect, ensuring you’ll have the strategic setup your deck needs to maintain an advantage over your opponent.

Origin Forme Dialga V’s alternate art is colorful and blends the recent CGI style of the franchise into an epic card that’s impressive to behold. Collectors who want to get the rarest cards from a set will need this due to its scarcity, while players of the game will appreciate this card’s effect to regain 2 metal energy from your discard pile with Dialga’s Metal Coating effect, and with a powerful Temporal Rupture attack to boot, this card will definitely see play.

The most desirable and prized card of the set is none other than Machamp V, which is surprising since it didn’t start that way. Sure, the artwork is cute and cartoony, but the card is not that powerful for players of the TCG. There is speculation that the drastic increase in this card’s value and desirability comes from the fact that a few collectors bought out most copies when the card was still cheaper. Regardless, if you’re a Machamp fan, or want some old-school hand-drawn art, this card will cost you a pretty penny unless you’re lucky enough to pull it from one of your packs.

Now that you know what the best cards to pull from Pokemon TCG Sword and Shield: Astral Radiance are, get those packs cracking, and hopefully you’ll get some of these cards. While you’re at it, check out our top 10 cards to pull from the Pokemon Go TCG crossover, and if you’re a hardcore collector, you’ll need to check out our list of all Pokemon cards to complete your collection.