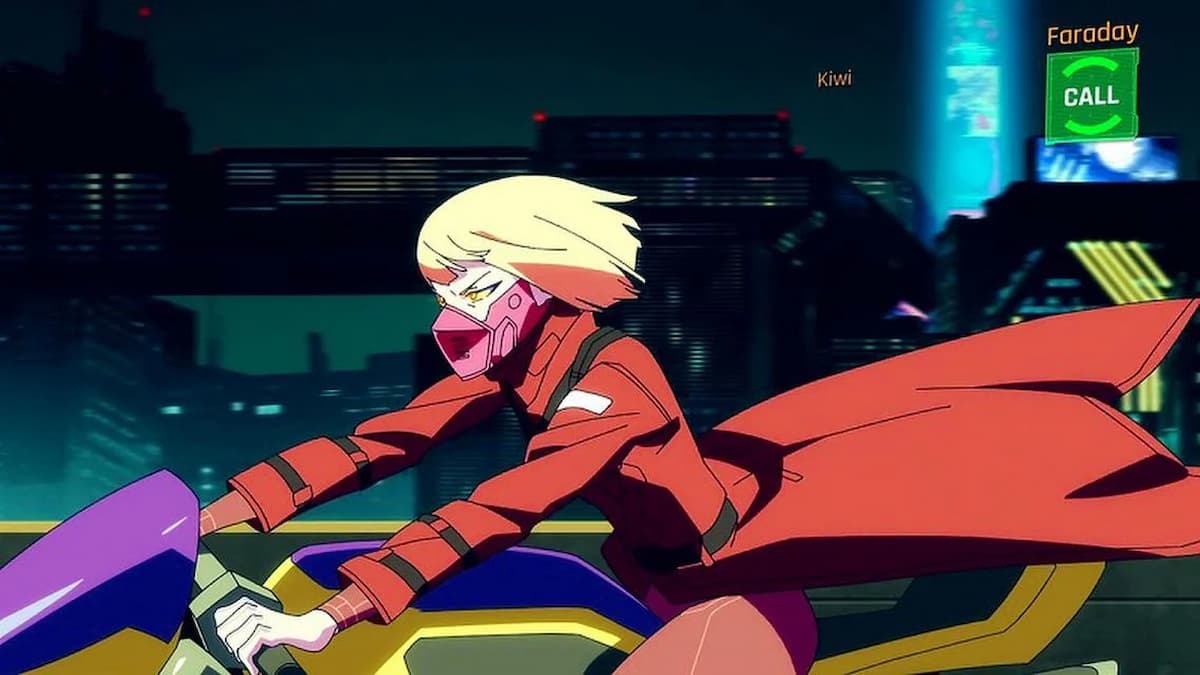 Netflix has had mixed success with its anime adaptations, but there’s no doubt that Edgerunners is among the best it’s ever done. The show has received so much acclaim that it’s brought Cyberpunk 2077’s universe back into the spotlight, and with it waves of new and returning players to the game. If you’re one of the many interested in building one of the characters from the show in the actual game, here’s how to build Kiwi from Edgerunners in Cyberpunk 2077.

Kiwi is one of the more mysterious characters in Edgerunners. She is Lucy’s mentor (build guide for Lucy here) and a master netrunner who is capable of disabling large groups of enemies within seconds, which means for this build we’re going very high on intelligence. In fact, we won’t even be using any firepower at all since Kiwi does everything with her mind. The idea with our Kiwi build is that we’re going to be able to spread Cyber Pyschosis, Grenade Detonations, Suicides, Weapon Glitch, and other Ultimate Quickhacks between enemies in a single upload.

So, all this means your first port of call is to get yourself a Cyberdeck. There are cheap options to be bought in the Kabuki Market from the Ripper Doc for new builds — full guide on how to get all cyberdecks here.

Ultimately, however, you want to work towards either of these two options for the late game:

Tetratronic MK.4 – purchase from Nina the Ripperdoc in Charterhill (40 Street Cred). This is the best suited for this build for its 75% reduction in Quickhack Uploads, and a reduction in Quickhack Cooldowns. It also makes Ultimate Quickhack effects spread between enemies, which is going to be crucial for taking out big groups of enemies without weapons.

Netwatch Mk. 5 – purchased from Doc. Rider in Wellsprings for 40 Street Cred and $30,000. This is the alternative option for this build. It’s a decent deck but it doesn’t excel quite as much as the Tetratronic since it doesn’t increase upload speeds, nor does it reduce cooldowns quite as much. Most importantly, it doesn’t spread Ultimate Quickhacks. That all being said, it does boost Quickhack damage and spread distance to spreadable Quickhacks, and so if you want to go for a Contagion-style build this would work well.

Now we have our Cyberdeck, let’s some implants to compliment her build. We’ve added Optical Camo here even though Kiwi is never seen using it, simply because as a netrunner you’re often going to be hacking in close vicinity to people and it makes sense that she would want to remain undetected while being so vulnerable.

Since we know from the show that Kiwi is arguably the most powerful pure netrunner in Edgerunners, it would make sense to build almost exclusively around Intelligence. Of course, we’ll need to invest in Technical Ability and Cool to get some valuable perks, too. Then just pour everything else into Reflex to multiply your Crit chance. In total, we went for 20 Intelligence, 18 Technical Ability, and 18 Cool, then put the remaining points into Body.

Let’s take a look at some useful perks:

Note that the following is not an exhaustive list, but are Perks we believe any Kiwi-style build needs.

Let’s start by bolstering Breach Protocol and manipulating it to operate according to the gameplay we’ll be using in combat as Kiwi. Again, we’re trying to make a build that is all about using Quickhacks to disable and destroy enemies in a single glance.

Now pepper in Mass Vulnerability + Upgrades Resistances & Quickhacks as they are going to reduce enemy resistances and make them more susceptible to Quickhack damage.

Beyond the important handful we’ve selected here, invest in Perks that reduce RAM cost and generally make your Netrunner build more efficient. You’ll also want to work your way up to Bartmoss’ Legacy so you can craft Legendary Quickhacks.

Since Kiwi is all about pouncing on enemies to devastating effect, it would make sense to invest in Ninjutsu when considering your Cool options.

The focus here is crafting and making sure we can forge strong armor to keep Kiwi well-protected as she hacks enemies amid fierce combat.

That does it for how to build Kiwi from Edgerunners in Cyberpunk 2077 build guide. Again, it’s not a completely exhaustive list of Perks and Cyberware options, but it should provide you with a great overview of what works best for the build style. For more related content, search Twinifnite or check out what’s listed below.