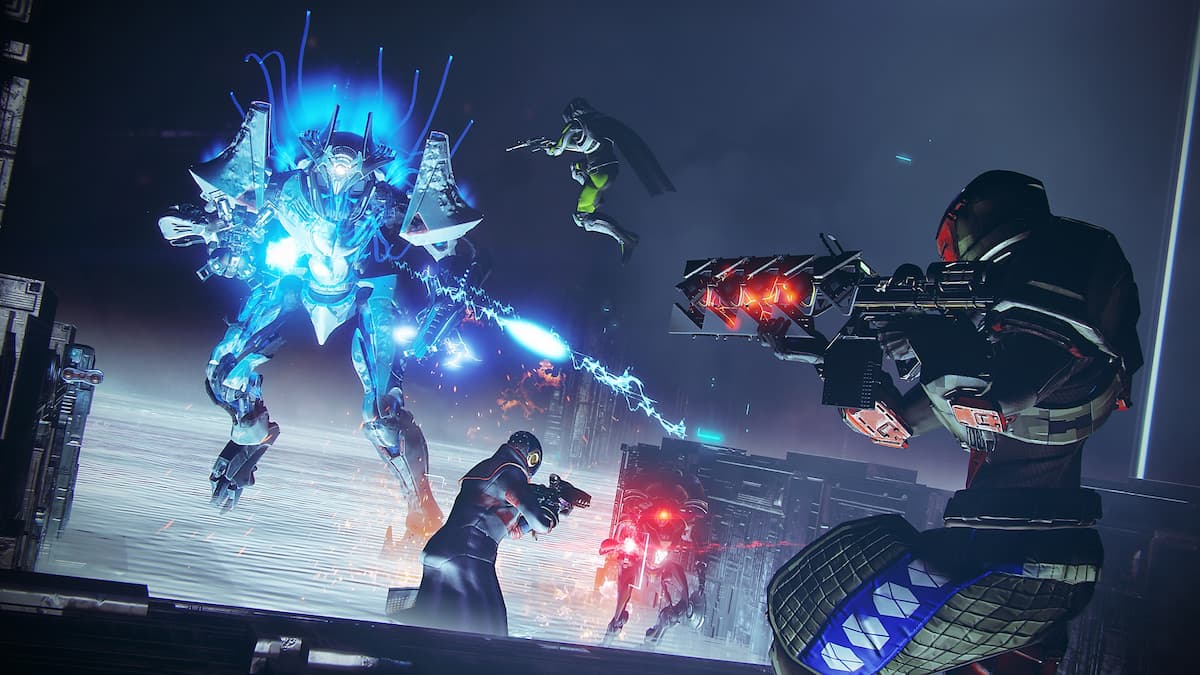 Let’s face reality; not all Exotic Weapons get the same amount of love and usage as others in Destiny 2, especially in endgame content. A prime example would be Arbalest, the Exotic Linear Fusion Rifle which saw little usage in high-end content in previous seasons, until it received Anti-Champion functionality in Season 15. Since then, Arbalest has been a staple in players loadouts for essentially all forms of endgame content, such as raids and nightfalls.

But what if other under-performing Exotic Weapons got the same treatment? Which is why today we’ll be discussing 10 Exotic Weapons that should get Anti-Champion Functionality next in Destiny 2.

(Note: This list is not in any particular order)

Salvation’s Grip, the first ever Exotic stasis weapon, is a weapon that sees little to no usage in any content of the game. The original “purpose” of is this gun was to use the stasis crystals it would generate to shatter other crystals found throughout Europa for a quest back in the Beyond Light campaign. Since then, aside from perhaps using it for platforming purposes, the gun’s relevance faded away after.

But by adding Anti-Champion functionality to the weapon, things could take a drastic turn. In a previous season, grenade launchers were given the seasonal mod, Unstoppable Grenade Launcher. That said, if Salvation’s Grip were to be given the Unstoppable Anti-Champion function intrinsically, the gun’s usage could sky rocket. Not to the extent of Arbalest, of course, but by doing so it gives the weapon the ability to stun Unstoppable Champions in endgame content, without needing a seasonal mod. This ability is sorely needed since very few Exotic weapons in the game have built-in Unstoppable.

Introduced in the Witch Queen DLC, the Osteo Striga Exotic submachine gun still remains as a fantastic option for clearing out rooms of enemies in one fell swoop. However, soon after release, players quickly realized that aside from defeating a bunch of enemies at once, the gun didn’t have any other value to it. This trait is valued in a lot of content of course, but when facing scenarios such as nightfall activities for example, where a specific loadout is needed, unless the weapon has Anti-Champion functionality, then the gun’s value quickly diminishes.

Submachine guns are notorious for having Overload Rounds as their seasonal Anti-Champion mod, thus by following tradition, Osteo Striga should be given Overload Rounds intrinsically. This will not only allow it to deal with large groups of enemies at once, but also deal with the often annoying Overload Champions, whom are notorious for being the most difficult to kill in endgame content. Osteo Striga has the potential to be one of the strongest primary weapon in the game, and by adding Anti-Champion Functionality to it, its potential could be fully realized.

The first ever Exotic weapon revealed for Destiny 2, the Sunshot Exotic hand cannon has had its ups and downs throughout the years. It recently became the center of attention back in Season of the Haunted, when the Solar subclass received its major rework and Sunshot was front and center for most Solar 3.0 builds. This weapon is fantastic for smaller scale content such as strikes or seasonal activities. But in the endgame, it shows little usage.

Adding Unstoppable Hand Cannon intrinsically to the weapon will allow Solar 3.0 builds to shine even further in endgame content. Sunshot is great gun to use when clearing waves of enemies, such as Osteo Striga as mentioned above, but struggles against stronger enemies like Champions. Giving this weapon Anti-Champion functionality will give it the respect it deserves as well continuing to be a staple in modern loadouts.

Similar to other Exotic primary weapons we’ve discussed, Ticuu’s Divination is a very strong weapon that can clear out hordes of enemies very quickly, but struggles against tougher opponents. In previous seasons where one of the seasonal Anti-Champion mods was Overload Bow, Ticuu’s Divination saw a lot of play especially in content such as nightfalls. But in the last three seasons since the return of Overload Bow, Ticuu’s usage has plummeted.

Unlike other weapons, however, Ticuu’s is in a unique position where any one of the Anti-Champion mods can be placed on it. Although, in our experience, Overload Bow would be best suited for it, as Ticuu’s is great for tracking and destroying them with ease.

Introduced in the Red War campaign, Borealis is a unique Exotic Sniper Rifle where it was never good or bad to use in a way. Its Exotic trait is similar to the Exotic Auto Rifle, Hardlight, where it can change its damage type, cycling between Solar, Arc, and Void. While it sounds good on paper, unfortunately, it never excelled when used in-game. Adding Anti-Champion functionality to it, however, could change things drastically for it.

Sniper Rifles are often granted the Anti-Barrier Sniper mod during a given season, such as the current Season of Plunder that is ongoing in the game. If Borealis were to be granted Anti-Barrier Sniper naturally, then its usage could skyrocket for hardcore content such as Grandmaster nightfalls for example.

Like Borealis, Skyburner’s Oath is an Exotic Scout Rifle that sounds good on paper, but when used in practice, it fails to meet expectations. Its main perk deals extra damage towards Cabal enemies, which sounds great, but it doesn’t sell as much damage as players would like. Unfortunately, Skyburner’s needs an overall buff before receiving Anti-Champion functionality.

In general, Scout Rifles are similar to bows, where they can be modified with multiple Champion mods, Anti-Barrier Scout or Unstoppable Scout being the main choices. In this case, any of the mentioned mods would work well with Skyburner’s Oath, and if it receives the buffs it deserves, the weapon has the potential to become a top-tier choice for players’ loadouts.

The first raid drop Exotic weapon in Destiny 2 and the first ever Exotic Heavy Shotgun in the franchise, the Legend of Acrius has seen varying usage over the years. In year 1 of Destiny 2, the weapon saw a solid amount of use in almost all activities. However, this quickly diminished as the years went by and other stronger weapons had released. Similarly to Skyburner’s Oath, Legend of Acrius is another weapon that sorely needs an overall buff before receiving Anti-Champion mods.

That said, the only Anti-Champion mod shoguns currently can receive is Unstoppable Shotgun. If the Legend of Acrius were to be granted this naturally, along with an overall buff to the weapon, it could potentially rise the ranks of raid weapons once more. Although, close quarters combat wouldn’t be wise in endgame content such as raids or Grandmaster nightfalls.

The first ever Exotic Trace Rifle introduced to the franchise, Coldheart had its glory days early on in Destiny 2. However, like Legend of Acrius, as years went on since its release, its usage quickly faded away as better guns had released. Especially in year three of Destiny 2, when the Shadowkeep DLC launched, where Coldheart would have a direct competitor, another Arc Exotic Trace Rifle, Divinity. However, the two weapons are used in different situations.

Divinity has been and continues to be more of a support weapon for teams to have guaranteed critical hits against enemies. On top of that, it was the second Exotic weapon ever to have a Anti-Champion mod naturally apart of the gun, in the form of Overload Rounds. Coldheart, on the other hand, is a damage focused weapon that continues to deal additional damage the longer the weapon is used. In year one, Coldheart was one of the “go to” weapons for endgame content. If the gun were to be given Overload Rounds, and a possible damage buff, Coldheart could potentially become a “go to” weapon once more.

Yet another case of “sounding good on paper but poor results when used in practice,” the Exotic Pulse Rifle, Bad Juju, could use some help. Gaining more super energy per kill is a fantastic perk for an Exotic Weapon; however, in this case, it doesn’t feel enough. As we’ve discussed with some of the previous weapons above, this gun needs an overall buff before it receives Anti-Champion functionality.

That said, Pulse Rifles also have the ability to use multiple Champion mods, Anti-Barrier Pulse and Unstoppable Pulse. For this case, Unstoppable Pulse could be a good fit for Bad Juju but Anti-Barrier Pulse could work just as effectively. Combining Champion mods as well as the ability to increase your super energy per kill could lead to some noteworthy builds for endgame activities.

Outbreak Perfected. Arguably one of the most beloved weapons in the Destiny franchise. We saw this weapon previously in Destiny 1 as Outbreak Prime, but later brought into Destiny 2 and remastered into Outbreak Perfected. When it was released back in Season 6, it completely dominated the game and was unanimously the best primary weapon in the game. Now, in Season 18, things have changed. Outbreak Perfected is still a powerful gun to use in most game content. However, it doesn’t dominate like the way it used to.

Adding Anti-Champion functionality could help bring this gun back to the top of the pecking order. Since Outbreak is a Pulse Rifle, Anti-Barrier Pulse and Unstoppable Pulse can be modified into it, however, given the nature of the gun and how it can be used, Anti-Barrier Pulse would be a better option for it. Giving this weapon a Champion mod will increase its value ten-fold, and can be a staple once more for hardcore content.

That’s all for now. Season of Plunder is well underway in Destiny 2 and hopefully in future updates and seasons we could potentially see some of these Exotic Weapons buffed in the way they deserve. For more related info and other Destiny 2 news, including frequent updates of what’s coming in the universe, check our related articles below.