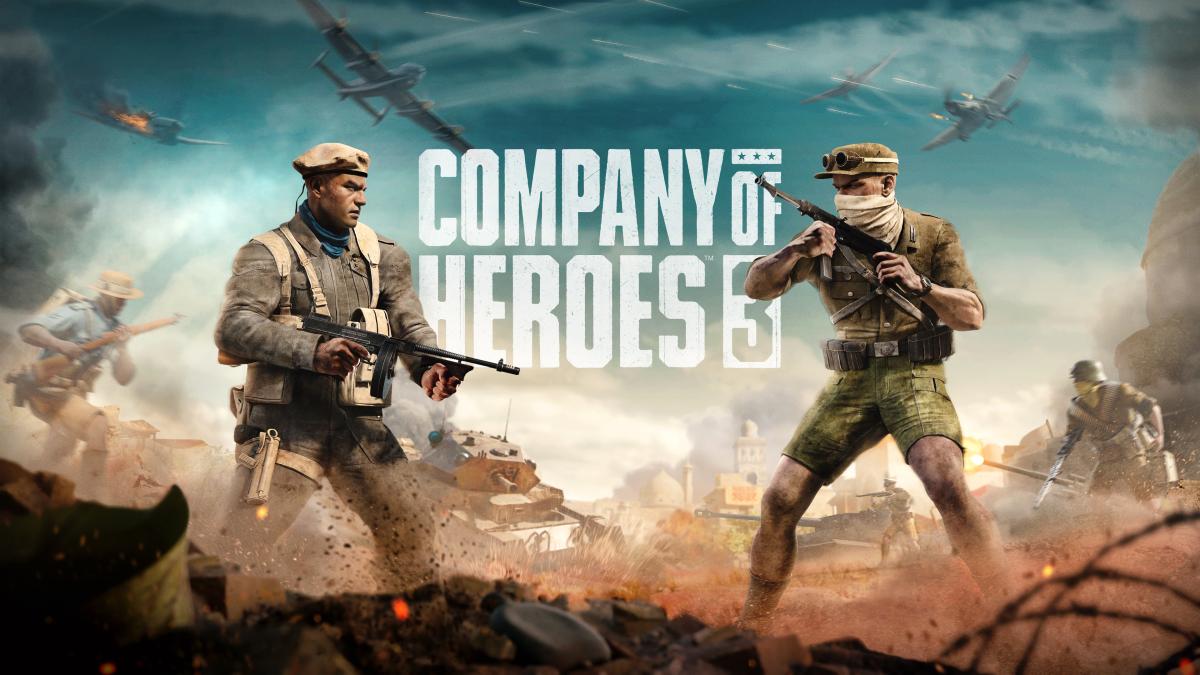 A few days ago, I tested a single-player mission set in the relatively neglected (at least in video games) North African front, prompting me to play the Afrika Korps faction and their Italian allies as they push through a village occupied by the allied forces.

Being an introductory mission, it was quite scripted, designed to let the player get to grips with the mechanics of the game, which can be quite complex, albeit not so complicated that a novice to the series should be intimidated. If you have any experience with RTS games, you’ll likely feel right at home, but following the tutorial steps should ease you into the gameplay of Company of Heroes 3 quite efficiently even if you’re not familiar with the genre.

The mission starts by showcasing one of the new elements of the game, which is the ability to have your infantry ride on tanks, which is quite handy if you want to move them quickly from one location to another.

Another element you immediately have to get to grips with is how to avoid having your initial contingent of tanks and infantry slaughtered at the first contact with the enemy.

Cover is extremely important to keep infantry alive, while you can intuitively decide the direction your tanks face by using the mouse. Yet, overlooking this crucial factor can easily lead to an early demise, as a tank’s sides and rear are more vulnerable than their front. This will likely become second-nature by the end of the mission, but charging in randomly hoping to simply overwhelm the enemy with numbers like you would do in less advanced RTS games will inevitably lead to learning harsh lessons the hard way.

The pace and style of gameplay is definitely very different compared to RTS titles based on amassing as many troops as possible and then simply zerging the enemy.

For one, Company of Heroes 3 caps your troops (there are ways to increase said cap, but they are limited), so the ability to conserve your strength and keep your small army in working order is crucial.

You have engineers and utility vehicles that can repair tanks and other vehicles, and you can replenish your infantry when they take losses. It’s much better to have a depleted unit retreat to fight another day, as opposed to let them die and them having to replace them completely.

The introductory mission pitches the player against a rather passive enemy: while the Allies will make limited attempts to harass you from time to time, you’re definitely given time and breathing room to consolidate your positions and set the pace of your advance, which means it’s often useful to send one of the extremely vulnerable Italian tankettes to scout ahead, and then soften up whatever enemy they meet with artillery and airstrikes. Perhaps it’s even too effective.

This tactic is definitely rather exploitable and it feels a bit cheap, but the developers informed me that the campaign provides players with enemies of varying aggressiveness, which means that you won’t always be able to dictate the pace of the engagement. On the other hand, this is fine for an introductory mission.

The variety of units at our disposal felt very satisfying despite the fact that I’ve seen just the tip of the iceberg. Every unit felt very specialized in its role, meaning that you have to carefully balance your units depending on what you expect to encounter.

Different units can support each other rather efficiently, so for instance you can have a flamethrower tank to deal with infantry threats, while those armed with guns will be able to form a main line and counter enemy tanks, and faster tankettes can perform flanking moves to hit armored foes in the rear where their peashooters might actually be able to do something.

Add infantry and artillery into the mix, and you have a lot of options to create task forces able to tackle different threats and missions efficiently.

Another element that felt definitely impressive is the much-boasted destructible environments. Gunning down houses that hide enemy infantry is definitely satisfying and it really feels like damage is applied where the shells land in a realistic and visible way.

Overall, Company of Heroes 3 is definitely a good-looking game, with impressive environments and detailed units that look appealing even when you’re zoomed away from the battlefield. The destruction features mentioned above definitely add to the visual spectacle.

Ultimately, Relic Entertainment’s upcoming World War II real-time strategy game has the potential to be a great addition to the franchise if the complexity and challenge of the missions ramps up organically as promised by the developers.

On top of its gameplay, Company of Heroes 3 also portrays a battlefront that is often overlooked by games set in World War II, which is definitely an added bonus if not a primary perk. I certainly look forward to simulating the dramatic battles of the African and Italian theaters when the game launches on PC via Steam on November 17.