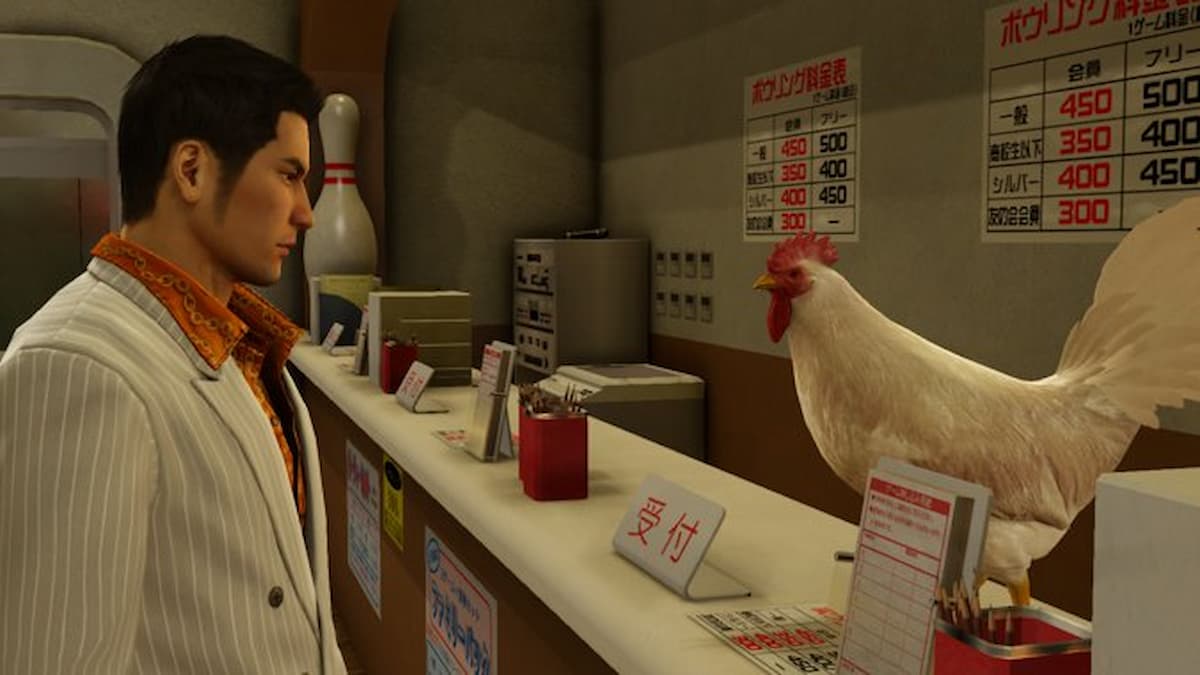 You wouldn’t expect a game called Yakuza to feature whimsical adventures and odd decision choices, yet somehow the game pulls it off in multiple eerie storylines. Furthermore, out of all installments in the franchise, Yakuza 0 certainly has several missions with a theme of wackiness and humor. So, to celebrate the game’s return to Xbox Game Pass, here’s a list of the top 10 weirdest quests in Yakuza 0.

When exploring the map of Sotenbori, Majima spots a poster of an ad that details a 10 million yen compensation for a drug testing job. As a result, he heads to the covert facility and signs a disclosure form, where he must take three types of illegal substances: Fatigue-Free Hexene, Concentration, and Vision Improvaxin.

Although the Researcher of the program reassures Majima about the drug’s enhancements, the components cause an opposite effect when Majima begins a series of tests involving multiple fights. For instance, the Vision Improvaxin doesn’t improve his eyesight and ends up impairing his vision, while the Concentration pill randomly changes his fighting style during the quest.

Fortunately, once you finish all these wacky battles, the Researchers stick to their word and give you the 10 million yen reward.

Kiryu must then roleplay with her in a “play session,” in which players choose S&M-themed decisions, including statements like “Your parents would cry if they knew you were here!” and “I want to be stepped on with heels.” To top the situation off, kids eventually show up to listen to your conversation, but you’ll still have to embarrass yourself in front of them to complete this mission successfully.

Emiri, Mach Bowl Receptionist begins as a regular mission and prompts you to raise your friendship level by playing with the employee. After you’ve challenged her enough, she will give you a task to bowl a turkey, a win that consists of three strikes in a row. In addition, the reward for this achievement is an actual turkey, but players soon learn that there is more to this prize as the rounds progress.

After Kiryu finishes the mission, he happily goes over to Emiri with the hope of having a lovely feast; however, he instead receives a live chicken. Thankfully, Emiri realizes the mistake once Kiryu points it out and tells him that she will cook the bird because she spent some time on a poultry farm. But, as he gazes into the eyes of the chicken, he states, “I want to keep it!” and names the bird “Nugget.”

Now that Nugget and Kiryu have a happily-ever-after ending, you’ll have the option to use this new character in the Real Estate Royale since chickens are, apparently, pretty knowledgable in this aspect.

Disciple of the New Order (Majima)

Another odd quest of Yakuza 0 tells the story of a mother searching for her daughter, Lori, after getting swept up in a cult. The older woman pleads with Majima to rescue her loved one by infiltrating the base of the Order of Munan Chohept Onast, a key name that you’ll have to remember to get in.

Once you arrive at the cultist’s area, you will go into their prayer room (a dance studio), where they are training in the art of another made-up word, Shooreh Pippi. During this time, Majima must do a series of eerie tasks to gain their trust and rescue Lori, including actions like posing while saying their traditional greeting and listening to the wise words of Guru Manan Suzuki.

Majima starts to understand the cult’s true intentions and realizes the Guru uses this sham to sleep with female members of the group. Luckily, he can stop this from happening and reunites the mother and daughter by the story’s end.

The Show Must Go On (Kiryu)

While Kiryu walks on Nakamichi Alley, a staff member of a production company asks him to sub in as a producer because the one prior argued with the director. Like all of the other side quests, he gets pressured into taking the role without any prior experience and changes his outfit into a classy, preppy look.

As the mission continues, the company’s director, Papillion, isn’t impressed by Kiryu, so players will need to prove their worth by deciphering TV production word slang, such as Erasable and Grocer (a TV prop and a process of tilting food on set.) But, of course, it isn’t a true Yakuza quest without some proper fighting, in which Kiryu battles the previous producer of the series when he threatens the crew.

By the end of the duel, Papillion reveals that he knew Kiryu wasn’t a real producer and offered him insight into the TV world, where he talks about the passion and heart of the industry.

Beyond the Door (Kiryu)

In Beyond the Door, Kiryu stumbles upon a mysterious area regarded as “a paradise for men.” However, the only way to get in is by being a rich man, and the character demonstrates this by throwing his money on the ground.

To Kiryu’s surprise, he discovers that the place is the official arena of the Japan Catfight Club, a tournament where women battle it out, and men bet on each round. Although he isn’t too keen on the idea, players can now use the area to earn cash while playing a weirdly provocative game of Rock Paper Scissors.

When Majima stares at a “statue” on Iwao Bridge, he learns it is actually a street performer named Tokokichi, starting The Entertainer’s Throne side quest.

Since Majima has befriended Tokokichi, he notices something is wrong with the street performer when passing by once again. In this scene, Tokokichi remains in statue form and proceeds to whisper, “I need to use the restroom.” But, because he is a true master of his craft, he doesn’t want to break the illusion with an audience present and asks Majima to distract them.

To perform this feat, players will have to decide how to cause a scene, including options like “Intimidate Them with Insults,” “Wail Like a Banshee,” and Shout, “Look, a UFO!” Unfortunately, none of these work, and someone in the crowd wants to fight Majima when he tries to sing in order to get their attention.

While the battle begins, Tokokichi hurriedly runs to the nearby pizza place and makes it before “the potty emergency got real,” leaving Majima with a newfound respect for entertainers.

Kiryu’s quest for pizza begins when he meets a foreign woman looking for the famous Italian dish in Kamurocho. She explains how she has recently escaped a “sexy job,” and she can only have a career if she acquires a “Bizza,” her way of presumably saying pizza. In addition, Kiryu is confused as to why this particular food item can solve all her problems, yet he still wants to help her.

Since the dish is a Western product, he has a hard time finding a place that sells it until he locates a restaurant called “Pizza-La.” However, once he obtains the food item, he has to run back to the woman when the employee tells him it needs to be served hot.

After he finally reaches her, the woman isn’t entirely sure about what Kiryu has brought her and tells him that she needs a “visa,” not a pizza.

Packed with an absurd amount of Hollywood references comes the side quest, Miracle on Tenkaichi Street. During this mission, we see a parody of real-life people, like Miracle Johnson (Michael Jackson) and Stephen Spining (Steven Spielberg.)

Because this mission involves showbiz, Papillion returns in this storyline to ask for Kiryu’s help in Miracle’s latest music video, a parody of Michael Jackson’s Thriller. This task requires you to protect him against zombies, which are paid actors instructed to go all out by the Popstar Prince.

The last moments of the quest feature a choice of deciding between a black or white box, another reference to the King of Pop’s hit song, “Black or White.”

The odd appearance of Mr. Libido in both Sotenbori and Kamurocho is undoubtedly one of the most talked about side quests within the community. In these missions, the underwear-dressed man, Habu, continuously hip thrusts when conversing with Majima. At the same time, a similarly dressed man named Akimoto proceeds to do the same to Kiryu.

Despite the two main characters’ repulsiveness to Mr. Libido, players have the option of befriending them. For example, Kiryu can collect telephone cards of girls, and Majima can view videos in Gandhara to increase each friendship level.

Both missions finally end once players reach the max rank, with Kiryu and Majima being friends with the two perverted men.

While you play Yakuza 0 on the Game Pass, you will surely see many other quests that are just as weird as the ones mentioned above. Nonetheless, these specific missions will have you scratching your head in confusion with the possibility of laughing simultaneously. Hopefully, we can still expect more wackiness with the tentative release of the franchise’s next popular title.